Initially, four people were reported missing, before two of the commandos rescued themselves by swimming to Spanish coast.

A military source told Moroccan state media that several trainees were able to get back to the Moroccan coast thanks to the assistance of the coastguards and the Royal Navy’s patrol.

Initially, four of Morocco’s Navy commando trainees were reported missing. Two managed to swim back to the Spanish coast in rough waves, “showing undeniable bravery and a high degree of professionalism,” the military source said.

The other two Navy trainees are still missing, with several air and sea assets of Morocco’s Royal Armed Forces and Royal Gendarmerie deployed to search for them.

The operation is part of Morocco’s Search and Rescue system.

In recent weeks, cold and windy weather caused damage to public and private properties, including floods in Morocco’s Casablanca.

Morocco launched an investigation to determine the circumstances of the fishing boat crash.

The incident followed a similar tragic accident that happened on Tarfaya’s coast one year previously.

In January 2019, authorities rescued 30 fishermen aboard a boat that started to sink off the city’s shore. 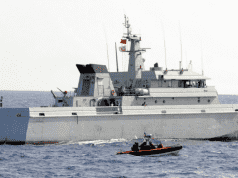