The Moroccan international football player scored his second hat-trick for Sevilla during his performance against Cadiz on Saturday.

Other than West Ham United, the English club that has long shown interest in the Moroccan striker, En-Nesyri has reportedly caught the attention of a number of other English Premier League clubs with his recent eye-catching displays for Sevilla.

Sevilla ABC quoted En-Nesyri’s friend and agent Anass Ouzifi as saying that another club other than West Ham has reached out to  the Moroccan international star for a deal.

“A few days ago another Premier club clammed me again, an important team. They asked me about what was Youssef’s situation. I told them Youssef didn’t want to leave Sevilla.”

The agent said that the club insisted and told him they could put together an attractive offer.

“I explained the situation well to them. Youssef is very happy in Sevilla, very grateful to the club and his teammates.”

“Not everything is about money in life,” the agent said.

Ouzifi recalled the deal Youssef En-Nesyri received from West Ham, who have so far put two offers on the table.

The English club’s latest offer amounted to 36 million, according to Mundo Deportivo.

Read also: En-Nesyri on his Memorable Hat-Trick: I will Take the Ball to My Mother’s House

Anas Ouzifi explained that when West Ham offered more than double what Sevilla pays Youssef En-Nesyri, the Moroccan footballer still made sure to make his position clear.

He said: Youssef “told me to tell them no and that he was very happy at Sevilla and he did not want to go anywhere.”

Anass Ouzifi said the football player asked him for his opinion and he shared the same thoughts.

“I told him  this is not the time. We are in a great club like Sevilla, a model team in Europe, a champion team and that what we had to do was continue to triumph.”

The football player has grabbed headlines in the past few days thanks to his spectacular performance against Cadez in the Spanish league.

En-Nesyri  scored his second hat trick for Sevilla on Saturday. The first hat-trick was for his former La Liga club, Leganes, in 2019. The hat-trick was the first in the team’s history in a match against Real Betis.

En-Nesyri, a Fez native, joined Sevilla for a five-year contract in 2020 for €20 million.

The Sevilla star, who is also a key football player for Morocco’s national team, kicked off his career at the Mohammed VI Academy in Morocco. 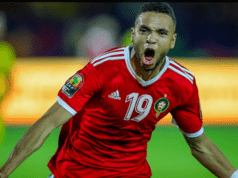