The news comes at a time when economic and diplomatic ties between Morocco and India are at a historic high.

During the inauguration ceremony, Rashmi Chowdhary, an Indian businesswoman, was appointed as Morocco’s first Honorary Consul to the State of West Bengal.

Ambassador Maleki gave a speech emphasizing the importance of opening a Moroccan honorary consulate in India to help consolidate diplomatic and economic ties between the two countries. He noted both countries’ “special interest” in furthering bilateral cooperation in investment, trade, tourism, and “people-to-people exchanges,” according to a press release from the Moroccan embassy.

The Moroccan diplomat pointed to the excellent relationship between Morocco and India, noting the “historic” visit of King Mohammed VI to India in 2015, which significantly improved the development of bilateral relations. Furthermore, he stressed the fact that the business communities of the two countries should benefit from the “momentum” imparted by the King’s visit.

Several prominent Indian dignitaries, including politicians, business people, as well as culture and media figures participated in the ceremony.

The news comes at a time when economic and diplomatic ties between the two countries are at a historic high, with various government bodies and private enterprises signing memoranda of understanding and a wide range of cooperation deals.
Just in December of 2020, Morocco’s BMCE Bank of Africa and India Exim Bank signed a Memorandum of Understanding to improve bilateral trade and investment.

Ambassador Maliki, meanwhile, has long underlined the need to take advantage of the “enormous” potential for trade that exists between the two countries. 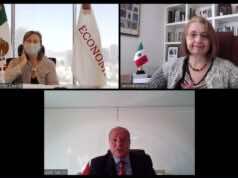