The prestigious recognition coincides with the world’s first International Day of Human Fraternity celebrations which fall on February 4. 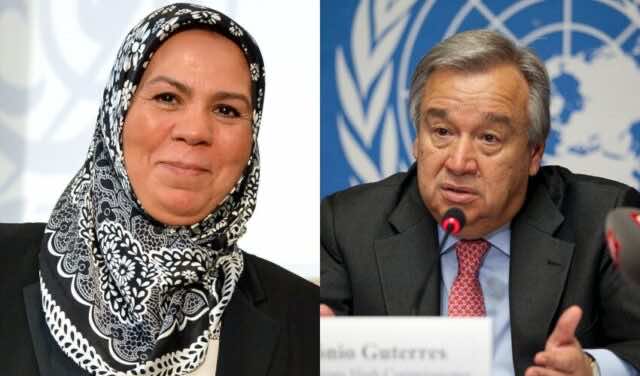 The award recipients were announced via a virtual press conference. The winners also received a one-million prize as a recognition of their achievements and outstanding work in promoting peace, reconciliation, human progress, and socio-cultural diversity.

Guterres and Ibn Ziaten made the final cuts of the prestigious prize after an independent jury selected them from a crowded pool of inspiring people from 30 countries.

Judge Mohamed Abdel Salam, the Secretary-General of the Emirati Higher Committee for Human Fraternity,  said the award celebrates people who have left their footprint in the promotion of peace.

“This independent, global award was conceived to encourage and recognize those who inspire us all to play our part in creating a more understanding, inclusive, and peaceful world,” Abdel Salam said. “Honoring Mr. Guterres and Mrs. Latifa with the Zayed Award for Human Fraternity in its first edition after the Grand Imam and Pope Francis were honored, in 2019, is a tribute to all those who love peace and an invitation to humanity to continue on this path.”

The prestigious recognition coincides with the world’s first International Day of Human Fraternity celebrations which fall on February 4. Aiming at raising awareness about different cultures, religions, beliefs, and the promotion of tolerance, the UN General Assembly declared the 4th of February as  International Day of Human Fraternity in December 2020.

Commenting on his winning the Higher Committee of Human Fraternity’s prize, Guterres took to Twitter to express his gratitude to the Emirati institution.

“My gratitude to the Higher Committee of @HumanFraternity for this recognition, which I’m honoured to receive with @LatifaIbnZ, an advocate for inter-religious dialogue,” he tweeted.

The top UN official said that he will donate the prize money ($1 million) to the UN Refugees agency, “in support of its invaluable work for the most vulnerable.”

As a commemoration of Human Fraternity Day, Guterres urged the international community to further commit to the promotion of cultural and religious tolerance, understanding, and dialogue.

For her part, Ibn Ziaten called for more tolerance, understanding, and forgiveness, arguing that these values are essential for celebrating humanity and achieving world peace.  The French-Moroccan, who is the founder of Imad Association for Youth and Peace, began her journey of promoting peace after losing her son in a terrorist attack near Toulouse, France in 2012.

Although being in deep sorrow, Ibn Ziaten showed compassion to her son’s murderer. In her quest to understand the reason why he had committed the heinous crime, she understood her son’s murderer felt abandoned and never succeeded to integrate into society, she said.

With the creation of her association, Ibn Ziaten embarked on story-telling journeys to raise awareness on the importance of religious dialogue to prevent impressionable and easily-lured young people from joining extremist groups or adopting radicalized thoughts.

“I am thrilled and touched to announce that I have just been awarded the “Zayed Award for Human Fraternity,” the activist Tweeted.

The Higher Committee of Human Fraternity is set to hold on Thursday evening a ceremony in honor of the recipients, at the “Sheikh Zayed Founder’s Memorial” in Abu Dhabi. The event will be broadcast live online.

The Zayed Award for Human Fraternity was created to pay tribute to the late founder of the UAE, Sheikh Zayed.

Pope Francis and Ahmed el-Tayeb, a prominent Egyptian Islamic scholar, were the first recipients of the award in 2019.