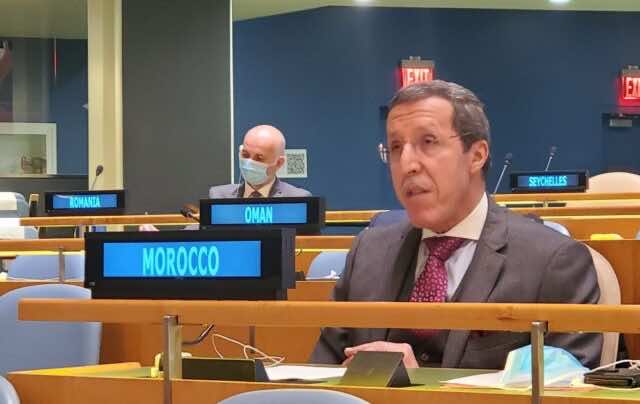 Morocco’s Ambassador to the UN in New York, Omar Hilale, has stressed the need to hold accountable the countries that allow the use of child soldiers in armed conflicts.

“States that shelter, arm, finance, and train armed groups which recruit children bear the same criminal responsibility as these groups and must be held accountable by the international community,” Hilale said during a meeting marking the International Day against the Use of Child Soldiers, known as Red Hand Day and celebrated every February 12.

The first example that comes to mind when reading Hilale’s statement is Algeria, which contributes to the exploitation of children as soldiers through its support for the militias of the Polisario Front.

The separatist group, which uses the town of Tindouf in western Algeria as its headquarters, has faced several accusations for training child soldiers over the years. Many pictures that have surfaced on social networks showed children in Tindouf carrying weapons and undergoing military training.

Hilale drew the international community’s attention to the fact that there are several countries that do not protect children from such exploitation.

“We are unfortunately still witnessing serious violations of children’s rights in many contexts, including in several refugee camps, where armed groups recruit children and separate them from their families, with total disregard of their fundamental rights,” Hilale deplored.

“As we speak, thousands of children around the world are forced to take part in conflicts,” he stressed.

Hinting at Algeria’s delegation of power to the Polisario Front in Tindouf, the Moroccan diplomat called on member states of the UN to protect all children on their territories, especially those living in refugee camps.

“Child victims who are trapped with armed groups suffer from a wide range of violations of their human rights, including the right to life, the right not to be subjected to sexual violence and other forms of torture, the right to education, and the right to freedom of thought,” Hilale warned.

The head of the Moroccan mission to the UN concluded his speech by presenting some of Morocco’s efforts to protect children around the world.

“The Kingdom has always given priority to the well-being and protection of children,” Hilale said.

He recalled that Morocco was among the first countries to endorse the Vancouver Principles of Peacekeeping and the Prevention of the Recruitment and Use of Child Soldiers. The international pact, signed in November 2017, includes 17 pledges about the protection of children from armed conflicts.

“Child protection has always been part of the pre-deployment training of Moroccan peacekeepers participating in UN missions around the world,” Hilale explained.

The Moroccan diplomat also emphasized Morocco’s “special attention” for training its peacekeepers to quickly detect signs of the recruitment and use of child soldiers.