The 50-year-old man reportedly stabbed his 38-year-old Moroccan partner in the throat after he discovered that she was cheating on him.

The crime occurred on the evening of February 14 in an apartment in the Fatih Haseki Sultan neighborhood, in the European part of Istanbul.

According to Sabah, the man found out his girlfriend was engaged in a relationship with another man, right after the couple returned home from a date to celebrate Valentine’s Day.

After learning about his partner’s alleged infidelity, the British-Syrian man had a nervous breakdown. He stabbed the Moroccan victim in the throat and then repeatedly stabbed her in seven different parts of her body.

Sustaining several fatal injuries and covered in blood, the woman died at the crime scene before she could receive medical help.

After he killed his Moroccan girlfriend, the man reportedly took a video of her dead body and sent it to a Palestinian man — the victim’s alleged second partner.

“This is how you end up for doing me wrong,” the murderer threatened the victim’s friend, as quoted by Sabah.

The man who received the video immediately reported the incident to the police. The murderer was arrested in the apartment two hours after the crime.

According to preliminary investigations, the British-Syrian man works in the tourism industry. He migrated to Turkey approximately six months ago.

He lived with the murdered Moroccan woman in the same apartment “for some time,” according to Sabah.

The suspect refused to talk to the police after his arrest. He will remain in custody pending the end of investigations. 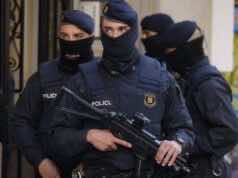