Infantino has visited the country several times ago, including on the 19th anniversary of Throne Day in 2018.

The visit is part of efforts by both FIFA and FRMF to enhance mutual cooperation.

The visit also seeks to develop cooperation between the two bodies in order to promote national and continental football.

Infantino was re-elected as FIFA president for a second term in June 2019.

He has been holding the position as FIFA’s top official since February 2016, and will continue to be in charge of governing the football body until 2023.

Infantino has made a few trips to Morocco as in his role as chairman of FIFA.

One of the visits was in July 2018, when he attended the 19th anniversary of King Mohammed VI’s accession to the throne.

He also visited Morocco the same year in February to attend the 40th Ordinary General Assembly of Confederation of African Football (CAF).

Infantino was linked with accusations of “sabotage” from Moroccans, who accused him of plotting to undermine Morocco’s 2026 World Cup bid to host the competition.

During the event, Infantino asked CAF representatives to do “everything possible to make the process as healthy as possible. It is about our credibility,” he claimed.

United 2026, a joint bid between the US, Canada and Mexico won the right to host the lucrative international competition in 2026. 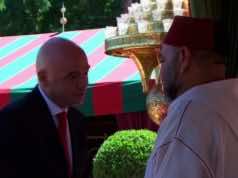