The F-35 was supposed to replace most US warplanes; instead it should be used on rare occasions and treated like a “Ferrari,” according to the Air Force’s chief of staff.

Rabat – Billed as a solution for all of NATO’s aerial needs, the US’ F-35 appears to have become a trillion-dollar blunder. In a February 17 interview with Air Force Magazine, US Air Force Chief of Staff General Charles Brown Jr called for the US to limit the use of its F-35 fleet.

General Brown stated that he intends to “moderate how much we’re using those aircraft,” as he compared the F-35 to a Ferrari. “You don’t drive your Ferrari to work every day, you only drive it on Sundays,” the US air force’s chief of staff remarked.

Comparing a jet-fighter, worth $100 million each, to the luxury automotive brand might not seem striking, yet an analysis by online publication Extreme Tech highlighted the remarkable nature of Brown’s statements.

The US alone has spent an estimated $1.5 trillion on developing the F-35 fighter. These eye-watering costs were justified by the promise that the “multi-role” fighter would replace much of NATO’s fleet.

It appears that the US Air Force has attempted to make this promise a reality. It retired proven assets such as the F-22 and F-18 with the F-35 as their intended replacement.

While the US Air Force has retired much of its fighters, the replacement is proving to be less capable than arms manufacturer Lockheed Martin initially promised.

While the F-35 is indeed in use, it appears to be too fragile and costly to use as the viable replacement for the F-16 and other US aircraft.

General Brown called the F-35 a “high-end” option, adding that “we want to make sure we don’t use it all for the low-end fight.”

Brown admitted that he expects this new approach would generate “some tension” but the F-35’s “high use rate” and high fail rate would mean the US could “burn up capability” if it used the jet for its intended broad use.

For Lockheed Martin, the trillion-dollar program appears to have been a public relations disaster. Luckily for the arms giant, however, General Brown stated that the US Air Force now needs a new fifth generation fighter to replace the F-35, as well as a sixth generation fighter. 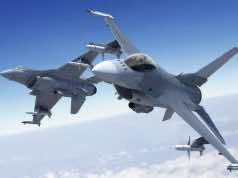 Morocco Retrieves Upgraded F-16 Fighter Jets from US Military Base