Pentagon Press Secretary John Kirby cited “ongoing threats” to US personnel, as well as recent attacks against US personnel in Iraq, as the reasons behind the airstrikes.

“The operation sends an unambiguous message: President Biden will act to protect American and Coalition personnel. At the same time, we have acted in a deliberate manner that aims to de-escalate the overall situation in both eastern Syria and Iraq,” read the statement.

But looking at the bigger picture, this could offer a glimpse into the next four years with Joe Biden at the helm of the world’s largest military.

The Syrian civil war arose in the wider context of the Arab Spring in 2011. What first began as a mass movement aiming to remove the Syrian President Bashar al-Assad and his government from power eventually escalated into a civil war.

As unrest continued, the Islamic State (IS), also known by its Arabic acronym Daesh, took the opportunity to occupy large swathes of territory across Syria and Iraq. At its peak in 2014, IS controlled almost a third of Syrian territory.

The war in Syria has shown itself to be a complex crisis, with the involvement of multiple key players and factions. On one side there is the Syrian Arab Republic and the Syrian Armed Forces, receiving support from Iran, Russia, and Hezbollah.

On the other there is the US-led international coalition against the IS. Despite its declared purpose of countering the Islamic State, it has also launched attacks against the Syrian government and pro-government targets. Many observers have called the US presence in Syria an “illegal occupation.”

Considering the broader context begs the question: If the US is retaliating against Iraqi attacks (in Iraq), why is it using its coalition against IS to bomb allegedly Iranian-backed targets in Syria?

While President Biden claims that “diplomacy is back at the center of our foreign policy,” CNN reports that “the decision to target the site in Syria was made from the “top down.’”

Even western media cannot help but to contradict themselves, reporting on the “retaliatory” strikes while also highlighting the fact that “officials are still unable to determine who carried [out the attack in Iraq].”

Several observers have also noted that Biden might reverse Trump’s decision to withdraw troops from Afghanistan, prolonging the international conflict in the country.

As the US wages war abroad, Biden’s presidency is tinged by lack of tangible improvement for US citizens at home.

Biden’s inauguration saw loud fanfare, with many hoping that the Democratic president will be a break from Trump’s “tyranny.” Despite the high hopes, many feel that Biden has failed to deliver concrete support for US citizens suffering from the pandemic. The $1,400 stimulus checks currently in Congressional discussion, which originally were intended to be $2,000, have made slow progress. The Senate also removed Biden’s promised $15 minimum wage from the COVID-19 stimulus package. The future remains uncertain.

If the government is not meeting the demands anti-Trump protesters raised during 2020, it is difficult to gauge how much more effectively Biden’s administration can actually be compared to that of his predecessor. Aiming for optics and relying on almost showman-esque diversity in the administration; this is how Biden’s diplomacy unravels itself, tone deaf and filled with contradictions.

Is the Biden administration’s political posturing just another attempt to hide the cogs of the US war machine? Lest we forget, many Democrats showed their colors, if just momentarily, lauding Trump’s missile strikes against Syria in 2017.

“President Donald J. Trump was right to strike at the regime of Syrian President Bashar al-Assad… and for that he should be commended,” at the time wrote US Democrat and now Secretary of State Anthony Blinken.

An “unambiguous message” for the next four years

It did not take long for Biden to make good on his promise, indeed, “America is back.” Despite the president’s eloquence, several US newspapers echoed the sentiments of a significant portion of the US population. “America Is Not ‘Back.’ And Americans Should Not Want It to Be,” read one such headline published in New York Times.

As Morocco World News noted previously, “for the Middle East a Trump victory could result in a significant long-term improvement” as it would “likely further isolate the US internationally.” Similarly, “his ability to destroy US hegemony makes him the best presidential choice for the Middle East and the world.”

While Trump proposed cutting two-thirds of the budget of the regime change arm of the US government, the National Endowment for Democracy (NED), Biden’s policies point to the US moving back towards a more traditional role abroad.

It remains to be seen whether Biden leading the US, and his form of diplomacy, will bring renewed military aggression to the Middle East. 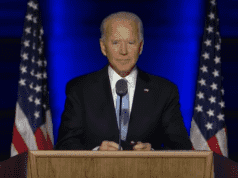