With the new arrival, Morocco has to date received 8.5 million doses of vaccines.

The new batch is the third arrival from China’s Sinopharm. In total, Morocco has received 1.5 million doses of the Chinese vaccine.

The North African country also uses the AstraZeneca vaccine, of which it has so far received seven million doses.

With the new arrival, Morocco has received a total of 8.5 million doses of vaccines.

Morocco is among the countries speeding up their vaccination campaigns against the pandemic.

The World Health Organization (WHO) has said Morocco is part of the first 10 countries that have “successfully completed the challenge of vaccination” against the pandemic.

About 578,942 have received the second dose of the vaccines.

Morocco seeks to secure a collective immunization against the pandemic by vaccinating 33 million people or 80% of its population. 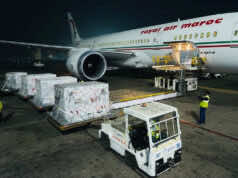