The cannabis was buried in the sand in a desert area near Laayoune. 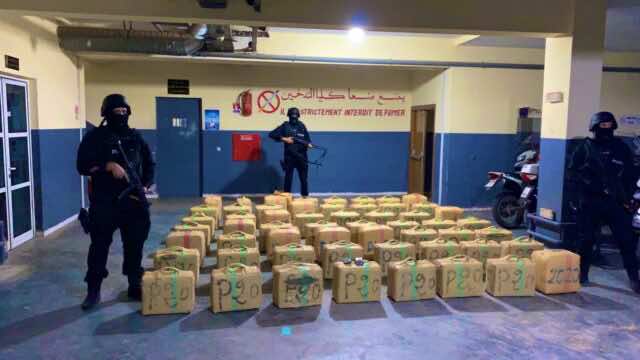 The suspect hid the drugs in a desert area about 10 kilometers away from the city of Smara, southern Morocco.

Police investigations resulted in the discovery of 56 packages of cannabis, with a weight of two tonnes.

Police also seized a vehicle suspected in the use of drug trafficking.

The security operation took place in collaboration with the General Directorate of Territorial Surveillance (DGST).

Police put the suspect in custody for further investigation.

The investigation is ongoing to identify all the alleged accomplices involved in the drug trafficking network.

Last week, Moroccan police carried out a series of operations against drug trafficking.

One of the recent drug busts took place on Friday, March 5.

The information revealed the involvement of sailors operating on an inshore fishing boat in an attempt to smuggle cannabis for international drug trafficking.

During the same week, Moroccan police seized over 3 tonnes of cannabis in the city of El Jadida, near Casablanca, and 4tonnes in Asilah, northern Morocco.

In 2020, Morocco seized 217.32 kilograms of cannabis resin and its derivatives. The number represents an increase of 37 tonnes compared to 2019.