Rabat – The National Office of Railways (ONCF) has signed a protocol with Alstom, designating the French company responsible for maintaining the new generation electric locomotives.

Following the contract awarded to Alstom Maroc in 2018, for supplying 30 of the latest generation PRIMA M4 electric locomotives, the company has now officially become responsible for their maintenance. This is in addition to trains already maintained through the Alstom – ONCF joint venture MALOCO, further cementing the French company’s role in Moroccan transport sector.

“The signing of this protocol consolidates our partnership with the ONCF and reinforces the mutual trust that unites us… We will continue our long-standing partnership with our client and in the country in order to contribute to the development of the Moroccan railway infrastructure” said Nourddine Rhalmi, Chairman and CEO of Alstom Maroc, in a press release.

So far 15 PRIMA M4 locomotives have been delivered, ten of which are currently in service for passenger and freight transport.

The press release explains that the new PRIMA M4 locomotives have a power of 5.5 MW, with a maximum operating speed of 160 kilometers an hour, and are supplied with 3 kV DC voltage.

While Alstom has been signing deals to supply various countries with their first hydrogen-powered trains, the French daily Le Monde reported on Morocco’s potential interest in the vehicle.

The French daily quoted director-general of Alstom Morocco, Brahim Soua, who noted that “potential customers have come forward in the United Kingdom, in the Netherlands, in Belgium, in Denmark, in Spain, [and] in Morocco.”

In Morocco, Alstom also produces railway cables and electrical boxes which are sent to its European factories, and then mounted on trains to be sold worldwide. 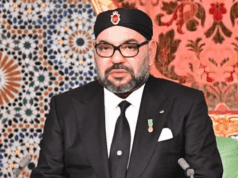