Before being appointed as President of the Competition Council, Rahhou served as the CEO of the CIH Bank.

Born on June 25, 1958, in Meknes, Rahhou graduated from the Polytechnic School in 1980 and the National School of Telecommunications in Paris in 1982.

He has held several positions including, IT department manager at Royal Air Maroc from October 1982 to May 1985 and deputy general manager at Crédit du Maroc in 1994.

In December 1999, Rahhou became a member of the Board of Directors of Bank Al-Maghrib — Morocco’s Central Bank — then a member in charge of the bank’s network of agencies in Morocco and abroad.

Before King Mohammed VI nominated him as CEO of the CIH Bank on October 6, 2009, Rahhou occupied the post of General-Director of Lesieur Cristal between 2003 and 2009.

After gaining King Mohammed VI’s trust, Rahhou was appointed as the King’s ambassador to the European Union and head of the country’s mission to the European Atomic Energy Community (Euratom).

Since its creation, Rahhou has been a member of the jury for the L’Economiste prize for research in economics and management. 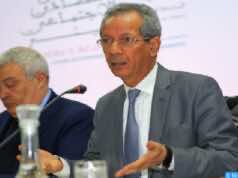