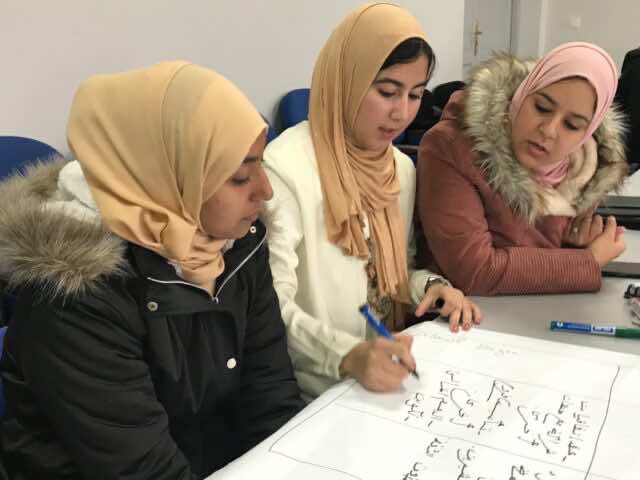 By
Nicole Luz
-
Nicole Luz is an undergraduate student at the University of Virginia and an intern at the High Atlas Foundation, Morocco.
Apr 10, 2021
Spread the love

Increased global awareness about human trafficking has shown many that slavery is not a thing of the past, but that it has rather just taken new forms.

The UN Office on Drugs and Crime defines human trafficking, also known as trafficking in persons (TIP), as “the recruitment, movement or harboring of people for the purpose of exploitation – such as sexual exploitation, forced labor, slavery or organ removal…by the use of improper means such as the threat or use of force, fraudulent schemes, deception, or abuse of power.”

As of 2016, 40.3 million people were victims of human trafficking worldwide. In Morocco, human trafficking seems to be on the rise, with an increase from 131 identified survivors in 2018 to 423 in 2019; 146 of the latter were foreigners. These may be people brought to Morocco involuntarily, but they are often also migrants, who are particularly vulnerable to trafficking.

This distinction is important because promoting the idea that migrants only participate in voluntary smuggling erases the plight of migrants that are indeed trapped in the system of human trafficking.

Not to mention, migrant smuggling is understood as consensual, giving people the impression that these migrants cannot be victims. Although this is its own issue entirely, as smuggling can involve many human rights violations, it is crucial that human trafficking survivors’ calls for help are not brushed off as crying wolf about something people believe they signed up for.

Why migrants are at risk

Migrants are in a particularly vulnerable position when transiting to Europe through Morocco or living in Morocco undocumented. Here, there is a link between trafficking and migrant smuggling, as traffickers often abuse the financial strain of migrants engaged in the latter to steer them into trafficking schemes, if not just taking them by force.

Despite some policies enforced by the Moroccan government to regulate migration to make the process safer, the large unregularized Sub-Saharan migrant population in Morocco remains at significant risk.

Women and children specifically are even more vulnerable to sexual exploitation, and they face further barriers to escaping their abusers. Women and girls make up the majority of human trafficking survivors worldwide (“Human Trafficking”). In addition, migrants suffering from trafficking often do not report their situation for fear of being deported, making it difficult for them to be identified.

Penalties for trafficking: The impact of Law No. 27.14

Until 2016, Morocco did not have any laws penalizing human trafficking. Law No. 27.14 was the first law to do so—it explicitly defines the crime and the penalties for perpetrators, as well as the state’s responsibility to identify and assist survivors with certain welfare and justice provisions.

The law also mandated training sessions for judicial and state officials on prevention and protection methods. Overall, the passage of this law was a step in the right direction for putting an end to modern slavery in Morocco and protecting vulnerable groups like migrants.

Despite the outlining of these policies, however, the Moroccan government has reported little about how many survivors have actually received psychosocial, medical, or financial and housing support, nor how many have received legal aid and cooperated in their traffickers’ prosecutions.

These discrepancies and the fact that the law is relatively new could also mean that Morocco’s human trafficking numbers may be higher than identified. According to the US Department of State’s 2020 Trafficking in Persons Report, the Moroccan government has largely depended on NGOs to take on its provision responsibilities, proving once again how essential they are for keeping communities safe.

After survivors of human trafficking have been identified, they often need assistance getting out of difficult contracts that allowed for their exploitation or need protection from their abusers. Community-led NGOs have been crucial—and arguably ideal—for providing both.

Pro bono legal aid clinics, such as the Clinique Juridique de la Faculté de Droit in Fez, Morocco, can help trafficking survivors navigate legal documents so that they may resettle into a safe home and formal occupation, as well as be able to emigrate back to their home country if they were brought to Morocco involuntarily. It is not uncommon for NGOs that deal with assistance for migrants and refugees to also take in human trafficking survivors, as the two issues can be so interconnected.

The Clinique Juridique, which is formed as a collaboration between University Sidi Mohammed Ben Abdellah and the High Atlas Foundation (HAF) through funding from the Middle Eastern Partnership Initiative (MEPI) and the National Endowment for Democracy (NED), also works on educating its clients on their rights and on the steps needed to start associations or small businesses.

These initiatives are helpful for the economic integration of both migrants and human trafficking survivors. Imane Akhezzane, HAF’s Program Director for the clinic, explains the importance of this work: “Many people are not aware that they are victims of human trafficking, even when they are. Our role within the Clinique Juridique is to guide these people, providing them with legal aid, so that they understand their situation and are conscious of their rights in order to help them remove themselves [from their situation].”

Furthermore, grassroots organizations can be key for raising awareness about trafficking around their communities and for creating safe spaces for survivors to come forward and seek help concerning their abuse. Amina Oufroukhi, the President of the International Judicial Cooperation Department of the Kingdom of Morocco, explained that one of the biggest challenges following the anti-trafficking law’s implementation has been identifying survivors and making them feel safe enough to report the crime.

Grassroots organizations have closer contact with community members, meaning they could not only prove more capable of identifying when someone is being trafficked, but also of getting them access to the information and resources they need to get out of their situation and find legal assistance. This is especially crucial for migrant survivors who are scared of going to the government for help due to their immigration status.

The Clinique Juridique in Fez recently published an article on its social media accounts about the conditions of human trafficking in Morocco for National Human Trafficking Awareness Month. In it, it emphasized the vulnerability of migrants in the area to the crime and its commitment to providing legal aid to survivors along with migrants, refugees, and asylum seekers. “Unfortunately, a slave trade still exists today and particularly threatens young women, women, and migrants. Our goal within the Clinique Juridique is not only to aid victims, but also to help other people so that they may not become victims as well,” says Imane Akhezzane. As Morocco continues to build its anti-trafficking policies and capacities, it is important to remember the nuances behind protecting, identifying, and reaching migrant survivors.