The name of Agadir originated from the Amazigh word Igudar, which are the collective granaries used as shelters for foodstuffs, livestock, as well as for harsh weather conditions.

Rabat – Morocco has launched a project to include collective granaries, called Igudar (the plural of “agadir”), to the list of UNESCO’s world heritage sites. The Minister of Culture, Othman El Ferdaous, announced the news via a Facebook post on Monday.

The ministry of culture organized a workshop with the objective of renewing the indicative list of national heritage proposed for UNESCO recognition, announced El Ferdaous.

Historical sites featuring on the UNESCO world heritage list are recognized for the roles they played in society. The Igudar, in particular, were indispensable in the daily life of the Amazigh people.

“Among the elements selected are the Igudar, whose candidacy naturally constitutes recognition of the role and place of this institution, which is rich in its material and intangible heritage in Moroccan society, particularly Amazigh,” El Ferdaous said.

Located near the southern city of Agadir, Beni Mellal, and in other regions as well, Igudar are a set of buildings that commonly served as water tanks, food warehouses, housing, mosques, and keeper’s lodge. During harsh weather conditions, Amazigh relied on Igudars to keep their food dry for many years.

For instance, almonds and argan were kept between 20 – 30 years. Butter and honey were kept in jars, while liquids, including oil, were kept in long-necked jugs.

The Igudar also served as a storage place for daily foodstuffs including dates, and figs in addition to valuable objects such as sheepskins, weapons and ammunition, festive clothes, henna, and title deeds.

The antique buildings were also a shelter for inhabitants and livestock in times of war or natural disasters (droughts, famines, epidemics, and locusts). In addition to their socio-economic role, the Igudars were also a gathering point for leaders to discuss the daily management of the community. 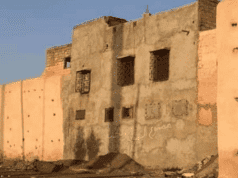 Moroccans Denounce House Construction in the Ramparts of Marrakech