Muslims fans showed reactions of love and appreciation as the actress shared her hijab photo during the start of Ramadan.

Rabat – Jada Pinkett Smith generated thousands of comments after she posted photos, wearing the hijab or Muslim headscarf, on her social networks.

The photos come amid the beginning of the holy month of Ramadan across the world.

Wearing a flowery skirt with a white top and a denim jacket, Jada said in her caption that she wore the outfit while she was in “the Middle East” watching her husband Will Smith “on his sunrise run.”

She described the outfit as a “non glamour glory,” but her fans have assured her that she “looked stunning.”

“Glamour is very subjective. You look beautiful,” one of her fans wrote.

On Tuesday, the actress wore a different colored headscarf, loving her look.

“I really think the color peach in the Middle East … suits me,” she said.

The photo and the caption received thousands of likes and comments.

Indian actress Priyanka Chopra commented on her post, describing the actress as “beautiful.”

Many other celebrities and public figures also reacted and commented on her post.

Jada Pinkett Smith’s Muslim fans also reacted to her outfit and the wearing of the hijab, extending their Ramadan wishes to the actress.

Ramadan started in the Middle East on Tuesday, while other countries began Ramadan on Wednesday, including Morocco. 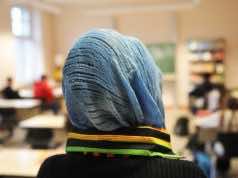