In a Twitter post, Kimbell noted that the United Kingdom currently buys approximately 6% of Morocco’s global export. He added, however, that the figures could be much higher in the coming months.

“The scope for increasing that proportion exponentially is huge,” suggesting that the planned Tangier-Poole ferry, set to launch later this year, could prove a game-changer in expanding UK-Morocco commercial relations.

“Morocco’s attractiveness as a UK source of high quality olive oil, superb fresh fruit, and of top-class vegetables is becoming unsurpassed,” he underlined.

Engaging with Kimbell on Twitter, many noted that English companies like Sainsbury’s and Morrisons are already sourcing more items from Morocco.

Data released by the UK’s HM Revenue and Customs (HMRC), confirms Kimbel’s projections about Morocco’s rise as a valued trading partner, as the UK’s imports of Moroccan produce for January 2021 have grown by 51% compared to January 2020.

In another Tweet, Kimbell suggested that it is “only a matter of time before Morocco outperforms both Spain and the Netherlands” as the UK’s trading partner. But Morocco’s exports of fresh produce outperformed those of the Netherlands in January of this year.

On April 9, Morocco’s Ambassador to the United Kingdom Abdesselam Aboudrar expressed satisfaction with the growing cooperation between London and Rabat, particularly speaking of the upcoming Tangier-Poole shipping route.

During the virtual event, the Moroccan diplomat unveiled further details on the UK-Morocco shipping route, which is expected to become operational in the near future. 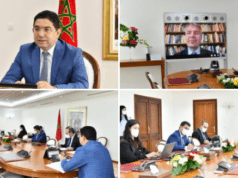