The discussions come weeks after Ireland appointed its first ambassador to Morocco.

Speaking through videoconference, the two officials discussed the need to further the improving relations between Rabat and Dublin.

The “high-level discussions” focused on the importance of strengthening the “excellent relations between” the two countries. The two ministers pledged to deepen the level of political consultations between their governments, said a statement by Morocco’s foreign affairs ministry.

Bourita and Coveney highlighted the success of the recently held Morocco Economic Week in Ireland, which took place from March 29 to April 10, 2021.

The virtual event represented an opportunity for both countries to gather investors to showcase various investment opportunities in a variety of sectors. The forum was also aimed at promoting bilateral economic partnerships and exploring opportunities in new areas, especially in Africa.

The two ministers expressed their satisfaction with the scheduled opening of the Irish Embassy in Rabat and the accompanying designation of an Irish ambassador to Morocco.

Ireland has two honorary consuls in Morocco, one in Casablanca and one in Agadir.

The Irish foreign minister voiced his country’s continued support for Morocco’s strategic partnership with the European Union and commended Morocco’s serious and credible efforts towards stability and development in the MENA region and elsewhere.

By the end of their discussions, Bourita and Coveney agreed to continue their “exchanges and political consultations on regional and international issues of mutual interest, including Libya and the Sahel,” reported MAP, Morocco’s state media. 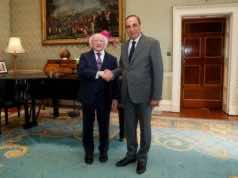 Morocco, Ireland to Put Behind Years of Cold Relations