Chauvin kneeled on George Floyd’s neck for nearly nine minutes during the arrest after a convenience store clerk suspected Floyd of using a counterfeit $20 bill. Medical examiners confirmed the death of George Floyd upon arrival at the hospital.

Debate ensued surrounding the cause of death as the county medical examiner determined that Floyd died due to cardiopulmonary arrest, commonly known as heart failure. Floyd’s family hired an independent contractor to conduct an autopsy which ruled death by asphyxiation.

The trial began on March 29 and lasted approximately one month as both parties’ legal teams deliberated.

Chauvin’s lawyer Eric Nelson argued that the use of force by Chauvin was “unattractive but necessary.” The Floyd family’s attorney Ben Crump argued that Derek Chauvin used excessive force which caused the murder of George Floyd.

After the 12 person jury convicted the former police officer of being guilty on all three counts, a Hennepin County Sheriff deputy escorted Chauvin out of the courtroom to await sentencing.

It is possible that Chauvin will spend the rest of his life in prison as the charges in Minnesota carry a maximum sentence of 40 years, 25 years, and 10 years respectively.

Following the murder of George Floyd in May 2020, millions of people across the globe marched in solidarity and in protest of police brutality worldwide.

The Black Lives Matter movement (BLM) formed after the murder of Trayvon Martin in 2012 when a Florida court acquitted his killer, George Zimmerman, of all charges.

BLM has led the protest to get justice for George Floyd and many feel justice has now been served after Derek Chauvin’s murder conviction.

“Painfully earned justice has finally arrived for George Floyd’s family. This verdict is a turning point in history and sends a clear message on the need for accountability of law enforcement,” said Floyd’s attorney in a tweet after the trial.

President Biden commented on the significance of the trial stating, “today’s verdict is a step forward” while also adding “this can be a large step forward in the march towards justice in America.”

The President spoke with Floyd’s family after the trial and thanked them for their courage and determination in seeking justice for George Floyd.

Many underlined the rarity of such verdicts, including the President.

“It took a unique, strange convergence of factors,” said the President while noting the bystanders and global protests that held Derek Chauvin accountable for murder. 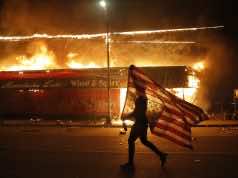