The construction of the Jewish museum is part of the 2018-2023 restoration and renovation project for the Fez medina. 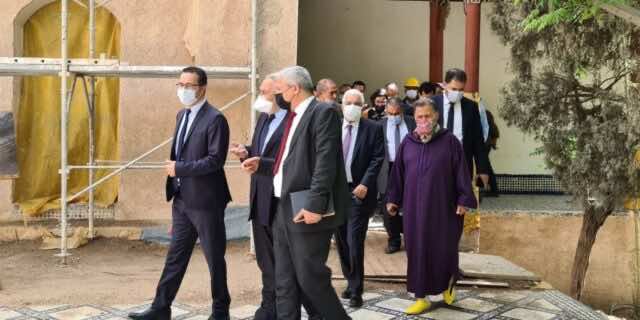 Rabat – On Friday last week, the scientific committee of Fez’s Museum of Jewish Culture signed an agreement aimed at financing the acquisition of highly valued “patrimonial art works” to be exhibited in the museum once it opens.

The committee signed the agreement with the minister of culture, Othman El Ferdaous; the governor of the Fez-Meknes region, Said Zniber; the president of the regional council of Fez-Meknes, Mohand Laenser; and the president of Morocco’s National Foundation of Museums, Mehdi Qotbi.

The construction of the museum began after King Mohammed VI’s visit to  the city of Fez on April 16, 2019.

The royal visit was aimed at supervising the progress of some renovation and restoration projects for the medina (old city) of Fez initiated as part of a larger development project called “Medina of Fez 2018-2023.”

After the meetig,  the committe toured the construction site of both the Jewish Museum and the Museum of Arab-Muslim Art (Al Batha Museum). The Batha Museum is also undergoing restoration works which are due to end by July.

Qotbi, the president of the National Foundation of Museums of Morocco, said the efforts to build the two museums speak of Morocco’s readiness to cement its reputation as “a land of openness and tolerance.”

For his part, Berdugo said the museum of Fez’s Museum of Jewish Culture is of high symbolic significance for the Moroccan Jewish community and embodies King Mohammed Vi’s determination to preserve Morocco’s cultural diversity and plural identity.

“This royal initiative goes beyond the museum universe to do justice to our common past and highlights the defense and conservation of the tangible and intangible heritage of the Hebrew tributary of national identity,” he said.