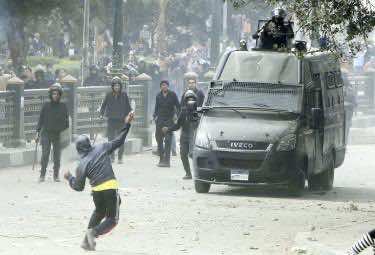 Fresh clashes broke out on Tuesday between police and protesters in the restive Suez Canal city of Port Said, where six people were killed at the weekend, an AFP journalist said.

Tension was running high around the main security building which was set ablaze on Monday, with anti-riot police firing tear gas at protesters hurling Molotov cocktails.

“We hate the police. We don’t want them around anymore!” Shaaban, 25, shouted.

The unrest in Port Said, fuelled by January death sentences handed down to football fans over deadly rioting, boiled over again on Sunday night when clashes killed six people, including three policemen.

Hundreds of people were also injured in the overnight fighting after the authorities decided to move prisoners awaiting a verdict over alleged involvement in last year’s deadly football riot.

The city has witnessed unrest since January when a court sentenced Port Said residents to death over the football stadium riot, triggering a series of protests and eventually a civil disobedience campaign.

Traffic in the Suez Canal, a vital waterway for global commerce, has not been disrupted, the canal authority said.

The interior ministry said it decided to move the prisoners from Port Said because it wanted to avoid unrest.

The upcoming court verdict, expected on Saturday, is for 39 defendants in a case which has already resulted in death sentences for 21 others, sparking clashes that killed at least 40 people.

Clashes also broke out on Tuesday near Tahrir Square in downtown Cairo between police and demonstrators who gathered for the funeral of an activist killed during protests in January and whose body took several weeks to identify.