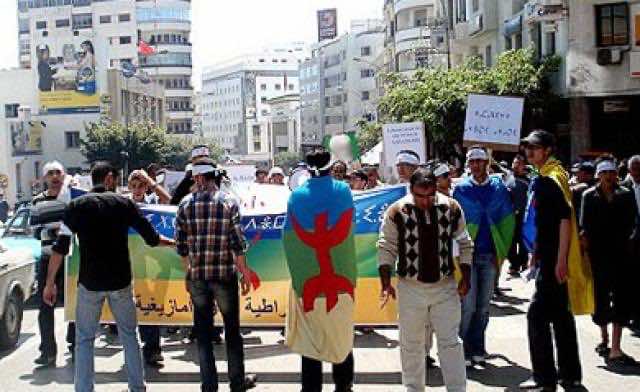 Brief Overview of the Imazighen:

Imazighen are the first people to dwell in the vast lands of North Africa. Among the countries these people lived in were Morocco, Algeria, Tunisia, Libya, Egypt, Mauritania, Mali, Burkina Faso, Niger and the Canary Islands. According to what experts in history and archaeology maintain, Imazighen have been living in the aforementioned countries for over than 5,000 consecutive years.

As for the meaning of the word “Amazigh,” it means the “Free Man.” This designation came from the fact that Imazighen throughout history refused any sort of colonization and occupation. Imazighen managed to expel the Romans and Vandals who had aimed at suppressing and enslaving them.

Some people state that the Imazighen have been illiterate through history. Still the reality is that many of them were very cultivated to the extent that they could interact and communicate with some of the most developed peoples in history like the Greeks and the Pharaohs of Egypt.

All over history, Imazighen have been proud of themselves and refused any type of indignity. As stated earlier, Imazighen have never been tolerant to colonization. As a result, they engaged in many bloody wars with various invaders with a view to preserving their honour. One of the best characteristics of these people is that they have been ready to die for their dignity at any time and under any circumstances. They have been keen on defending their lands, families, fields, and even animals with ferocity and determinedness.

A real Amazigh would prefer to die or be hanged than to accept degradation and insult. Living proofs of this is that most Imazighen are now dwelling in hills and mountains. This has occurred because when Imazighen saw their dignity seriously threatened and they have no chance to defeat their aggressors, then they prefer climbing mountains for refuge rather than accepting the idea of others killing their families or taking their wives as the French and Spanish colonists did during their colonization in the first half of the previous century.

Through history, Imazighen adopted different religions opposed to only Islam. Imazighen adopted Christianity and Judaism at certain eras of their history. But, when Islam first came to North Africa, most of them at that time left their original religions and adopted Islam, which they saw as special and more corresponding to their lives and needs.

Nowadays, there are many extremists, whether “Arab Nationalists” or “Islamists” who see Imazighen as a real threat to Islam. Do these extremists not understand that Imazighen first accepted Islam without any war or fight? Do they not know that Imazighen served this religion even more than Arabs did? Even for the time being, Imazighen are the most conservative people in Morocco and in North Africa in general. So, claiming that Imazighen are a serious danger to Islam is slanderous statement that some people use to fulfill their agendas.

The Amazigh people are known for their openness to others’ cultures, religions, tongues, and ways of life. Imazighen coexisted with Jews who have lived in Morocco and other North African countries before they emigrated to Palestine and other Western countries. They have coexisted and still coexist with Arabs without problems. There is no proof in historical textbooks that these two ethnic groups have any history of fighting and quarreling with one another.

Real evidence to the Imazighen’s openness is how they master other people’s languages while theirs is fought and degraded without any obvious and logical reasons. In Morocco, for instance, most Imazighen speak both colloquial and classical Arabic sometimes even better than Arabs themselves do. Another example of this openness is how Imazighen find no problems marrying with Arabs.

Few individuals would argue against the idea that a people have the right to live in peace in their country and should not be subject to colonization. Palestinians have the total right to live in peace and enjoy independence in their land. This is what Amazigh movements have long stressed. But, the perspective from which most Imazighen sympathize with Palestinians is quite different from that of Arab nationalists and Islamists. We, Imazighen, support Palestine from a humanitarian standpoint as we support any other people from being suppressed due to their religion or language.

Morocco keeps supporting Palestinians both financially and politically. We have no quarrel in seeing the government carry on supporting the Palestinians in every international fora. However, this support should not be provided at the expense of other nations that need help like people in Azawad, Burma, and Kurdistan who are being killed every single day. Another problem is that ever since Palestine was first occupied has consumed much of Moroccans’ own money and wealth with nothing in return and even at the expense of Moroccans who live in dire conditions such as in the outskirts of Tinghir, Ait Abdi, and Imilchil in Eastern Morocco. Moreover, at times Moroccan politicians remain preoccupied by the Palestinian cause while turning a blind eye over claiming two of our precious pieces of land that are still under Spanish occupation.