Sidi Ifni - Anyone keeping track of what has recently happened to the protesting teachers in Rabat must have come to the conclusion that teachers have no value in Morocco. 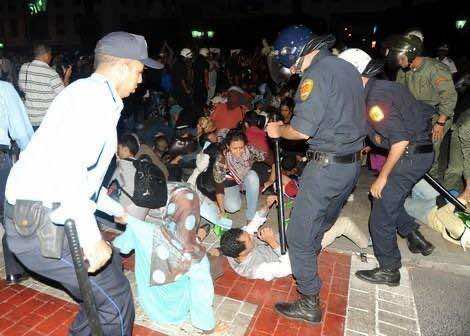 Sidi Ifni – Anyone keeping track of what has recently happened to the protesting teachers in Rabat must have come to the conclusion that teachers have no value in Morocco.

They have no dignity, no respect and no recognition, either. The B.A. and M.A. teachers who have been beaten, taunted, disrespected, injured, and followed by the security forces must call on the Moroccan population to bear in mind that their education is in jeopardy and that their future could be gloomy.

The cruelty and savagery that the teachers, calling for their basic right to be promoted with their diplomas, were exposed to is a clear sign that Morocco is not determined to reform its ignominious educational system. It is not surprising, then that Morocco’s educational system has ranked the world’s lowest, according to UNESCO reports. Violence against teachers continues to tarnish the image of teachers.

Is Morocco willing to make itself a powerful country that can catch up with the world? No!

This is all for the simple reason that teachers are treated as nuisances, as disturbing agents, as good-for-nothing people, as tight-fisted crooks, as inglorious people, as traitors, as profiteers, and as mere beneficiaries. Think of the savage manner in which a policeman beats a  B.A. or an M.A. teacher.

When we watch the videos and see the pictures capturing teachers pulled from their clothes, beaten with batons by security forces, injured, and scattered with blood, we become more certain than ever before that we are living in a country where knowledge, education, enlightenment, learning and teaching are not desired.

At times, high-ranking officials of the Ministry of Education surprise people with their so-called innovative ideas to reform education. At other times, they turn a blind eye to the injustices done to teachers, forgetting that the latter are the key to reform. Without holding teachers in high regard and granting them their rights, thinking about reform is akin to ‘pouring water into the sand’.

What reform is the so-called Ministry of Education talking about? Demoralizing teachers by denying them one of the most basic rights ever? Assaulting teachers in the presence of parents, students, and the society at large? Is it by violence against the peaceful protesting teachers that we dream of developing ourselves as a country? What reform is the Ministry expecting, then? Certainly, the Ministry and teachers have been at odds for many years now. No reform to education has ever been attained in the world without making teachers a part of it.

Wherever we go in Morocco, we often hear people cracking jokes about teachers. These people talk about the meanness of teachers, their holidays, their free time, their salaries, and other issues related to their jobs. Moroccans forget about the corrupt, thieves, rapists, embezzlers, criminals, wealthy men, lawyers, judges, bankers, and other members of the society. All they remember is teachers. Who owns the villas? Teachers or other people? Who runs companies? Who has deluxe cars? Who owns lands? Teachers or other people? Regrettably, the government has succeeded in inciting the society against teachers.

What do we expect from students when they see teachers being beaten, pulled, and injured? How do expect members of society to trust, respect and lend credence to teachers if ignorant security forces trample upon them with their boots?

Now, it is clear why disruptive behavior and violence against teachers is growing rampant in Morocco. Students are good at imitating, and when they watch videos and see pictures of bleeding teachers, they will be encourage to shout at, make fun of, mock, and provoke their teachers. They will also be encouraged to behave badly, since security forces behave badly towards them.

Teachers do not go on strike until they see one of their rights being confiscated. I believe that the more violently teachers are treated, the more tarnished the reputation of the teaching profession grows. Just as the noble profession grows disrespected, education carries on lagging behind. This is actually what is happening now!

Meanwhile, Japan, Finland, England, France, Germany, and Austria, which are aware of the importance of honoring teachers, are now enjoying the leading rankings in terms of quality of education. They have reached these honorable and prestigious rankings, not through overworking, underpaying, and beating teachers, but through honoring teachers, paying them well enough, and taking anyone attacking or speaking ill of these agents of change to court. Unfortunately, the case is totally different in my home country. Aren’t our teachers the candles that once burned themselves to light the way for us? Our Moroccan government must remind itself!