Marrakech, Hosting the Al Quds Committee’s 20th Session in Marrakech, Morocco renewed its commitment and conveyed a strong message to the international community to preserve the Holy City of Al Quds in furtherance of the Palestinian-Israeli peace process. 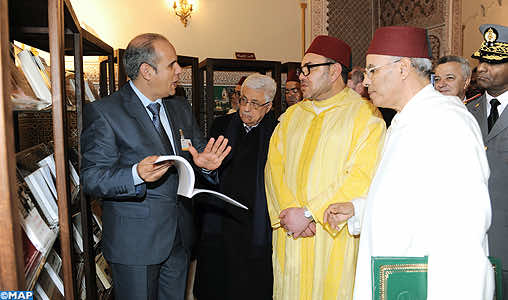 Marrakech, Hosting the Al Quds Committee’s 20th Session in Marrakech, Morocco renewed its commitment and conveyed a strong message to the international community to preserve the Holy City of Al Quds in furtherance of the Palestinian-Israeli peace process.

Marrakech witnessed the opening of the 20th Session of the Al Quds Committee (Jerusalem) of the Organization of the Islamic Conference (OIC) on Friday under the chairmanship of King Mohammed VI of Morocco.

The auspicious event, the first meeting of the body in ten years, was reported on the front pages of of a number of national newspapers. Le Matin du Sahara reported that Morocco’s hosting of the conference reflects “Morocco’s renewed ongoing engagement in the Palestinian cause.”

According to Al Akhbar newspaper , the Committee’s members will take this opportunity to confront the international community with its responsibilities concerning the protection of the Holy City of Al Quds against the rising “Judaization” of the region resulting from expanded Israeli settlements.

The Akhbar Alyawm newspaper drew attention to Iran’s participation in this 20th session through Mohamad Jawad Zarif, the Iranian Minister of Foreign Affairs, a positive development given recent diplomatic discord between Morocco and Iran. According to the same source, a lot of (beaucoup)?] hope is put on the Al Quds Committee’s Session in light of the latest developments under Israel’s occupation policy with respect to the Palestinian territories carried out by Israeli authorities.

In light of systematic “Judaization” attempts, confiscation of houses, and the expulsion of Palestinians from their land, Al Quds city is, more than ever, in dire need of the Arab and Islamic world’s support.

Morocco’s commitment to defending the holy city and the Palestinian cause is evident in its hosting of the Al Quds Committee’s 20th Session. It sends a strong message to decision makers all over the world, especially the Arab world, thatactions are needed to resolve the ongoing dispute over  the occupied Palestinian territory in accordance with the relevant United Nations resolutions.