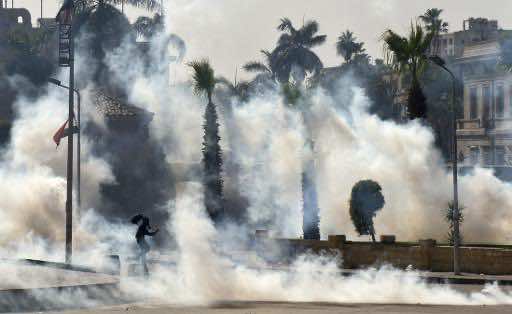 Supporters of deposed president Mohamed Morsi took to the streets in Cairo, Alexandria and other Egyptian cities to vent their anger at Sisi who overthrew the Islamist leader nine months ago.

Underlining Egypt’s deep polarisation, clashes also erupted between Morsi supporters and opponents of the Islamist leader in the northern Cairo districts of Ein Shams and Matareya, the officials said.

Ten Morsi supporters were arrested in clashes with security forces in the northern Damietta province, and 28 were arrested in the southern Minya province for carrying leaflets hostile to the military and the police, the security officials said.

Supporters of the widely-popular presidential hopeful, who toppled Morsi after massive street protests against his turbulent one-year rule, were also out on the street to celebrate his candidacy.

Carrying Egyptian flags and portraits of the field marshal, dozens took to the streets in Alexandria while scores gathered in Cairo’s iconic Tahrir Square, symbol of the 2011 uprising that toppled veteran president Hosni Mubarak.

Sisi faces no serious competition in his bid for the presidency and is widely seen as the only leader able to restore order after more than three years of turmoil since the Arab Spring uprising.

His candidacy is likely to further inflame Islamist protests and worry secular activists who fear a return to rule by the military and the strong-arm tactics of the Mubarak era.

The electoral committee said in a statement it will hold a press conference on Sunday to announce the presidential election calendar, MENA reported.

The poll is scheduled to take place before June.

Morsi’s Muslim Brotherhood rejected Sisi’s candidacy outright and a coalition of his supporters had called for Friday’s protests.

“What we said nine months ago was confirmed and the mask fell off from the face of the coup leader… with the announcement of his candidacy to ‘the bloody presidency,'” it said in a statement Thursday.

Sisi “broke the oath he made before the elected president Mohamed Morsi by toppling him and made the Egyptian army enter the political arena with him,” the coalition added.

Since Morsi’s ouster, his supporters have been staging weekly protests calling for his reinstatement.

Their rallies have often degenerated into deadly street clashes with security forces and civilian opponents. But the numbers turning out have sharply decreased amid a violent security crackdown.

More than 1,400 people have been killed in the crackdown, according to Amnesty International, and thousands of others have been jailed.