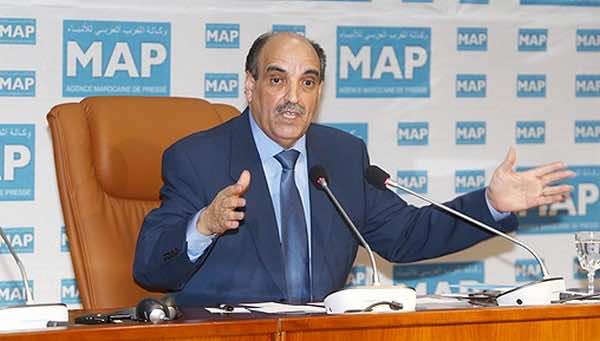 Rabat – The Polisario separatists and their Algerian sponsors are endeavoring by all means to torpedo the autonomy plan in the southern provinces, presented by Morocco in order to reach a political, final and mutually-accepted solution to the artificial Sahara conflict, said president of the Royal Consultative Council for Sahara affairs (CORCAS), Khalihenna Ould Errachid.

Ould Errachid, who was guest to MAP forum, stressed that “the Polisario and Algeria initially attempted to play down Morocco’s autonomy plan, before attempting to torpedo it.

For the CORCAS president, the negotiations process is no longer apt to reach a solution. He explained that the separatists and their Algerian sponsors, in their endeavor to go back to obsolete plans that proved impossible to implement, such as the Baker plan and the referendum, are attempting to torpedo the whole process.

He also recalled that HM King Mohammed VI has repeatedly stressed that Morocco will not remain idle as the other side is adamant in refusing any consensus-based settlement, stressing that the Moroccan autonomy plan will help the population to manage their own affairs in a democratic and autonomous way, under the sovereignty of Morocco.

He also pointed out that the autonomy plan marked “a turning point in the history of the region” and “a remarkable novelty that took by surprise all enemies of Morocco’s territorial integrity”.

Morocco’s efforts since the conflict broke out have earned the kingdom the respect of the United Nations Organization and of the international community which welcomed the Moroccan autonomy proposal as “serious, credible and realistic”, he said, insisting that the autonomy plan now stands as “the only vision likely to bring adequate answers and the appropriate solution to the Sahara issue”.

Ould Rachid further noted that Sahrawis have also welcomed the proposal which consolidated the Sahrawis’ confidence in Morocco’s ability to achieve the development to which they aspire.

The CORCAS president underscored the old ties binding the Sahrawis to Morocco, both at the affective, family, economic, cultural and historical levels, noting that such links do not exist between the Sahrawi populations and the Tindouf camps in Algeria.

At the African level, he pointed out that all African countries are focused on their development plans, except for Algeria, South Africa and Nigeria which support the Polisario thesis, stressing that not a single Asian country supports the separatism thesis while Venezuela, overwhelmed with its own domestic problems, is the only Latin-American country to show a clear support to the Polisario.