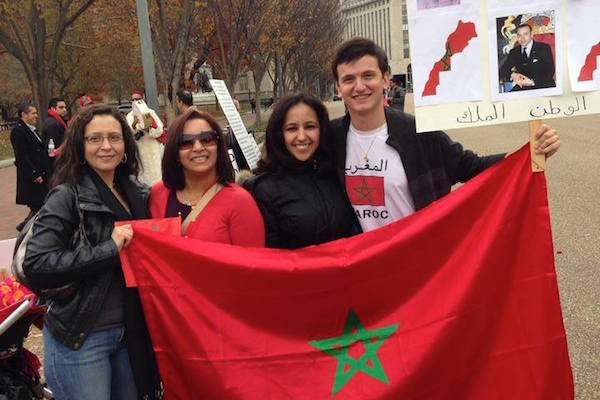 Washington D.C – Last May, I had an interesting encounter on a train ride from Marrakesh to Rabat. It was my fourth visit to Morocco as an American Jew, visiting a land my paternal ancestors had left many generations ago.

As usual in Morocco, people are friendly on train rides, especially within the small confines of a cabin. Several Moroccan passengers began talking to me in Arabic out of curiosity. Where are you from? What brings you to Morocco? Where did you learn to speak Arabic? As our discussion grew deeper, I began telling them how much I loved visiting Morocco and the pride I hold in my Moroccan roots. They listened and wanted to know more. I told them that I attended a rally for King Mohammed VI the previous November in Washington and that I was on the TV channel 2M shouting “I love you Morocco.”

They were impressed by my abundant knowledge of Moroccan history since the days of Moulay Idriss I. They were amazed that an American boy could feel such a deep connection to their country, our country!  I remember this conversation like it was yesterday. A man sat across from me who was originally from Rabat. A mother and a small child were sitting next to him returning to Tangier. And beside me were two young ladies returning to Casablanca from a weekend in Marrakesh.

At a certain point, one of the young ladies asked me “the question.”  A question I receive often in Morocco, especially after they discover I have Moroccan heritage. “Are you a Muslim?” Usually, I decide to be discreet and avoid answering these questions. Only my friends in Morocco know I am Jewish, I rarely announce it to strangers. Then I realized this is Morocco. None of us are strangers. We are one big family. After listening to them converse with me for 2 hours, I decided what do I have to hide? I could tell from the tone of our conversations that they were open-minded and tolerant individuals  so I replied to the young woman “no, I am not Muslim. I am Jewish.”

At that moment, my blood rushed and my face warmed as I awaited their responses. I felt nervous but there was no negativity. The man had a very proud look on his face and said “we are all brothers and you are one of us. Religion does not divide us.” The mother with the young child gave me candies as a gesture of warmth and kindness. And the two young ladies were surprised but also curious. Their reactions inspired me and empowered me to be proud of who I am.

They started asking if I can’t eat pork or how often must I pray? At this point, our conversation became more personal. One of the young women from Casablanca told me “I wish my father, may he rest in peace, was still alive.  He was a former politician and well-respected in Casablanca. He would have loved meeting somebody like you.” I remember pulling out the Moroccan flag from my small carry-on suitcase and kissing it. They were in awe and so proud to have met me.

As the train reached Casablanca, the two young ladies left after expressing pleasure in meeting me. The mother with the young children also departed to connect to a different train. As she exited, she told her child “give him a kiss on the cheek.” A Muslim woman told her child to kiss the cheek of a Jew they had just met. In this moment, I realized a common human identity really overrides all preconceived ideas and I asked myself “why can’t all Muslim-Jewish relations be just like this train ride?” By connecting with my Moroccan identity, I was able to become closer with Muslim people as a Jew.

I am Jewish and I love Muslims. I love Muslims because half of my friends are Muslims.  I love Muslims because every time I visit Morocco, my Muslim friends are ready to embrace me and tell me “welcome to your second home.” I eat with them. I go out with them. I sing and dance with them. I laugh with them. I cry with them. I sleep in their homes. Whenever I have a problem, they are at my side immediately. When I was 16 years old, a Muslim Palestinian woman helped me obtain my first job and I am the grandson of Israeli immigrants who came to the United States in the 1960s.  We became close as she was my boss. One day, my Israeli grandmother came to my work and my Palestinian boss told her “I love your grandson.”

My maternal grandparents saw tragedy with their own eyes and endured persecution in their lifetimes so they taught me to respect all people and to never hate. My maternal grandmother especially inspired me to always get along with people regardless of their differences. Hundreds of members of her family were murdered in the Holocaust so she understood how hatred and indoctrination could drive people to do the most wicked things to humankind.

A few years ago, my grandmother’s Liberian Muslim friend had a family emergency at the beginning of Ramadan. Her friend was supposed to prepare the entire meal for all her relatives the first night of Ramadan. My grandma felt sorry for her and immediately went to the supermarket and bought a ton of food and began cooking without her friend’s knowledge. All day my grandma cooked her specialties before she called her friend to come over to surprise her.

These examples of human compassion should inspire all of us to reach out and never perceive each other as enemies. We are all brothers and sisters. Religious affiliations and political persuasions should never keep Jews and Muslims divided especially in the face of extremism and media incitement. The rise of anti-Semitism and Islamophobia in certain countries should bring us together against hatred, not drive us apart.

Let’s hope that my experience on the train ride from Marrakesh will one day become a broader reality for Muslims and Jews all over the world. May we all have our children kiss the cheek of the other as brothers. I will never succumb to Islamophobia and I will never accept those who label Muslims as terrorists. I will always respect and cherish my Muslim friends and I will never show hostility toward any Muslim.