Rabat - Moroccans from all walks of life denounced the “excessive use of force” by the police when dispersing protests organized by teacher trainees on Thursday, in several Moroccan cities. 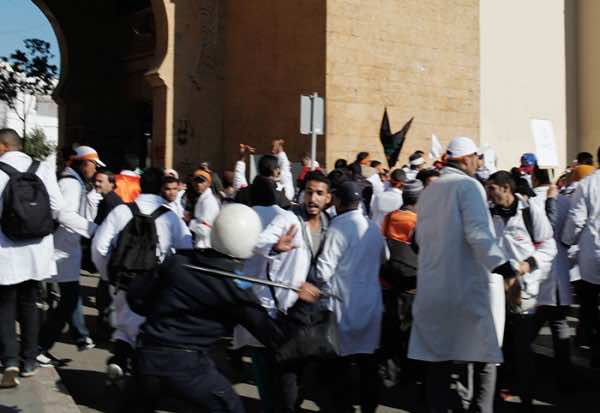 By
Larbi Arbaoui
-
Larbi is a freelance writer and assistant editor at Morocco World News.
Jan 7, 2016
Spread the love

Rabat – Moroccans from all walks of life denounced the “excessive use of force” by the police when dispersing protests organized by teacher trainees on Thursday, in several Moroccan cities.

Most of the comments on social media blamed the Moroccan government, accusing it of “giving the green light to the police to use force” to suppress teacher trainers, who took to the streets to peacefully protest the “unfair” government decrees.

Police used unreasonable force to disperse teachers who organized peaceful sit-ins and marches in several Moroccan cities, holding placards that read “No To The Two Decrees.”

Videos and photos of the victims being beaten by police have been widely shared on social media, with comments denouncing the government’s refusal to open a dialogue with teachers and strive towards finding a solution to their demands.

M’hammed Grine, a Moroccan human rights activist and a member of the political bureau of the Party of Progress and Socialism (PPS), told Morocco World News that the “excessive use of force” by the Moroccan police against teacher trainees, particularly in Inzegane, Agadir, calls into question how respectful “they are of Article 22 of the 2011 constitution.”

Grine, whose party is part of the PJD-led coalition government, said that Article 22 of the Moroccan Constitution states: “The physical or moral integrity of anyone may not be infringed, in whatever circumstance that may be and by any person that may be, public or private.”

Article 22 also stipulates, “No one may inflict on others, under whatever pretext there may be, cruel, inhuman, [or] degrading treatments or infringements of [their] dignity. The practice of torture, under any of its forms and by anyone, is a crime punishable by the law.”

The human rights activist added that violence, whether verbal, physical, or symbolic, is becoming a serious problem spreading rapidly in society.

“We are all required to raise our voices high against violence,” The Moroccan politician said.

“We need to launch a broad societal movement to confront all forms of violence and manifestations of hatred,” he said, calling on the Moroccan people, including the country’s intellectuals, professors, scientists, media and other stakeholders to stand against violence.

Grine believes that it is time that the Moroccan government started a “serious and responsible dialogue with teachers in order to find solutions that meet their expectations.”