Rabat – On the back of a camel I wondered how the likes of Ibn Battuta and Leo Africanus, great travelers of their times, could manage weeks riding atop these uncomfortable creatures. Our trek lasted no more than an hour, and I was only too relieved to dismount that ill-padded hump. The camel behind me seemed to be suffering from indigestion, which he reminded me every so often by belching in the direction of my unhappy nose. Terribly impolite animals, camels, but they got the job done. With the setting sun to our backs accompanied by lights winds and moderate winter temperatures, we were fortunate to experience the Sahara in her gentlest of moods. Come summer she will be burning tourists to a crisp and sending legions of scorpions and snakes to clean up the leftovers.

Before long we arrived on a dune overlooking camp, and our guide left us watching the sunset while he led the camels to their resting spot. There was a snowboard standing upright in the sand, which we gladly borrowed to dune-surf as we waited for the last light of day. I nearly fell over into some camel dung going down, a lucky miss since the nearest shower was miles away. As the sun began to meet the horizon, a fantastic array of colors filled the sky. It is in this small window before the night that one remembers just how many different shades our world takes on, and for a brief moment poor and rich alike are equal in the face of this great treasure of the Earth.

Dusk relinquished its place to night, and while the path was still barely visible we made our way into camp, which was no more than a small collection of tents. Underneath the largest of them, the communal tent, our hosts treated us to “the finest Berber whiskey.” It was upon taking my first sip that I realized their joke, as my mouth tasted only traditional Moroccan mint tea. Thankfully, the tagine was actually tagine.

After dinner we gathered around the fire, a welcome warmth as the desert grew colder and colder around us. We were thirteen in total, including five cheerful Berbers who picked up the drums lying about them and started playing. The bass drum struck a simple rhythm, and the others followed in-time with their own variations until a complex beat was established, then they started singing. We all stood up and danced around the fire in a circle, and a few of us picked up our own drums and joined the beat, dancing round and round until we were too tired to continue. 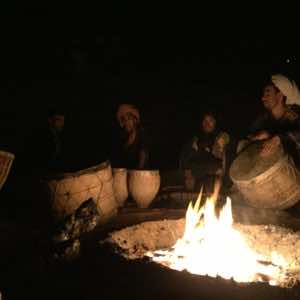 When we all sat back down to catch our breath, it was the foreigners’ turn to try to create our own song. To describe the noise that ensued as music would be far too generous- give camels opposable thumbs and they could have played better. These Berbers had been playing with one another for years and on so many nights that they knew how to create something new on a whim. They understood one another through music just as well as they understood life in the desert. I found their bond endearing, and I thought of my brothers at home, thousands of miles away.

One of the Berbers unraveled his turban, which stretched long enough to allow all thirteen of us to grab on as he led our procession away from camp and up onto the dunes above. He stopped when the only visible light came from the stars above. The moon hovered low on the dark horizon, and soon I had witnessed for the first time a moonset. With the moon gone, the other lights of the night sky grew noticeably more distinct, and we gathered once more in a circle to lay silently looking up at space. I write “space” here intentionally because I feel there is an important difference in connotation between ‘space’ and ‘sky.’ ‘Sky’ has an air of limitation to it, neglecting what lies beyond the Earth’s local atmosphere, whereas ‘space,’ I feel, includes the immense reality outside our little planet, known and unknown. The latter seemed more fitting for this moment. One can see the sky in the city. One cannot see space in the city. Only far away from our own advanced societies can we see the beauty of space. I thought of all the unlucky souls who would never see a night like this, whether because of light pollution or smog, and I pitied their loss.

Gradually our party split off in different directions, most returning to the tents, but a few of us remained in the dunes. I decided to take off by myself for a while, and so I moved farther and farther away from camp into the dark. Cool winds swept halfheartedly across my face, seemingly sharing the laziness of the winter sun before springtime demanded more rigorous work from the both of them. One of the Berbers told me that by April he and his companions would be braving harsh sandstorms. Alone, I turned my gaze to the stars.

The first feeling to seize hold of me was fear. Not for my safety necessarily, as I knew the way back and the more harmful creatures of the night were burrowed deep to escape the cold. Rather, I felt the certain type of fear one experiences during moments of solitude in the wild. I had not been so alone in a long time, but once I reacquainted myself with the feeling and overcame my fear, I was free to enjoy my thoughts and the quiet peace of the desert.

Of course, I marveled for some time at the sight above me. Accompanying my amazement was the humbling recognition of my own insignificance, but, like the feeling of being alone, once one overcomes this frightening reality a sense of freedom takes hold. Vanity is merely a cloak to protect against the coldness of reality; once one becomes adjusted to the cold, the cloak becomes unnecessary. I wondered if the same thoughts occupied the heads of my new Berber friends. Life in the desert leaves one plenty of time to spend alone, thinking.

At some point the concept of space travel crossed my mind. Amongst all those stars so far away, there has to be a little planet like ours out there. I reflected on how much mankind had achieved in the last fifty years alone, and I became excited about our future. My thoughts turned again to the Berbers, who were now probably fast asleep at camp, and I wondered if they were aware of space travel, of the fantasies in science fiction, of the potential in the stars above us. And if the answer was yes, I thought, did they even care? I wish I could have asked them, but language stood in my way, so I would have to let them keep their secrets.

Many other thoughts passed through my head that night, and when I felt ready I returned to camp, leaving them behind in the desert until I would inevitably stumble upon them at another time, in a different land. The luxury to spend so much time inside the mind, in silence, until one is ready to move on, this is a concept far displaced from where I come. It is only on just such adventures that I am able to quell the agitation I feel in not having enough time to think.

I do not believe, however, that life in the desert is for me. My Berber friends reminded me the value of simplicity, of humility, of silence, but even they escaped into their music, their laughter, and their finest Berber Whiskey. It may be that the desert, or, more broadly put, the wild, is simply my personal cure for city life. Funny, since the city was first a cure for desert life.

But alone or amongst friends, in the wild or in the city, camels will always be uncomfortable and smelly beasts.