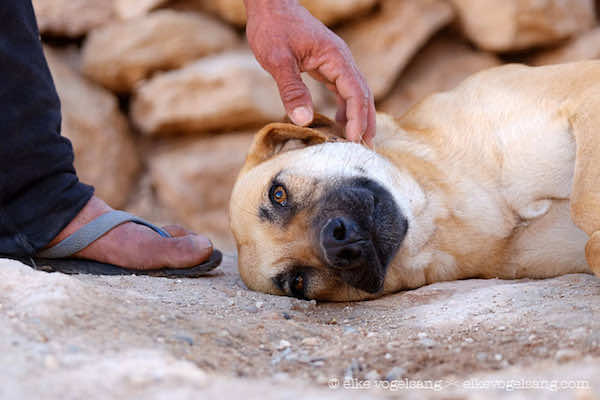 Rabat – Local authorities in Ksar El Kebir had announced the authorization for the mass shooting of stray dogs starting March 22, 2016.

An online petition had been launched that gathered almost 2000 signatures in just a few hours. Another one was directly addressed to the president of the Municipality in Kser El Kebir by a group of young men living in Ksar El Kebir.

For a few days, social networks had been roiled by a project to exterminate stray dogs in the town of Ksar El Kbir by the local authorities. As the president of an association, deeply committed in animal protection, I am sending this message to the “President du Conseil Communal” of Ksar El Kebir, Mohamed Simou, as a last attempt to stave off this criminal action. If this project is successfully completed, it will lead to a four day, unprecedented slaughter of hundreds of defenseless dogs.

The hunting of these helpless animals is as detrimental to the town of Ksar El Kebir as it is to our country’s image. Indeed, the announcement of this murderous expedition has already disrupted social networks, before its inevitable distribution among television screens worldwide. This project, supported by the President du Conseil Communal, beyond being cruel, is totally inefficient in its design.

Nature detests a vacuum. An exterminated pack of dogs will be soon replaced by another, without the creation of hermetic boundaries around Ksar el Kebir. This is why the World Health Organization, the International Fund for Animal Welfare, and above all the Global Alliance for Rabies Control advise local authorities around the world to neuter and vaccinate dogs. They state that this will reduce the canine population and, stop rabies, instead of indulging in barbaric practices from times long since past.

Local authorities, in an ironic attempt to curb the number of starving canines, are sought to kill dogs, adults and puppies alike. These actions are as inhuman as they are expensive for the taxpayers. What’s more, there are numerous studies and expert assessments available from the best international specialists in public health, which demonstrate that this approach is totally inefficient.

Naturally, the town’s authorities will argue that spread of rabies is a pressing risk, and therefore, dangerous for the population. However, how are they going to discern the dogs with rabies –if indeed there are any – from the healthy dogs? Is the town of Casablanca, which kills more than 15,000 dogs a year, free of rabies? Isn’t it time to recognize efficient and worldwide-recognized methods? The Koran states: “There is not an animal (that lives) on the Earth, nor a being that flies on its wings, but (forms part of) communities, like you.” (Sura 13 Aya 15).

We are therefore accountable for every animal on Earth. We must measure up to this moral and religious responsibility. Within this framework, we reach out to you in order to set up an efficient, humane and less expensive action plan: a widespread campaign to neuter dogs while at the same time vaccinating against rabies. Through an approach that is worthy of a town like Ksar El Kebir, this would protect the human population while reducing the canine population. We are not trying here to convince the authorities of methods that work only in Europe or America. One needs only to look to another Moroccan town, Taghazout, where the attitudes towards the canine population show how a town needn’t sacrifice humane practices for the betterment of public health.

The monumental and sympathetic work, accomplished by the association “le Cœur sur la Patte,” together with local authorities, were able to prove that a path void of violent actions towards animals is possible. In Taghazout, stray dogs are neutered, progressively reducing their number, while they are vaccinated to protect them and the population from rabies. Additionally, they are identified with an earring to confirm that they have received this care. Ksar El Kebir is a town nationally and internationally renowned for its artists, writers, poets and sportsmen; it is my wish that it would not become a town known for slaughtering animals.

Our association Comme Chiens et Chats, along with many others in Morocco and abroad, are reaching out to you today. We are ready to come and visit the local authorities, to organize an action plan, which will meet everyone’s needs, while saving hundreds of lives. We must declare here that the Moroccan dog has become a full-fledged breed, well liked even outside our country’s boarders.

In France, Belgium, and Switzerland, and even Canada, witnesses say how loyal, faithful and loving this breed can be. Yet, hundreds of stray dogs in Ksar El Kebir roam tonight, looking for food and shelter, oblivious to the fact that starting March 22nd, 2016, guns will start to kill them. Shooting at these dogs will also put the population at risk, traumatizing the most fragile of out constituency. This approach will never properly temper the canine population, and will certainly never eradicate rabies. Only vaccination will stop its spread.

I address this message to all the local authorities that will, one day, have to make the same decision. Several associations are offering to work with you to set up policies against canine over-population and against rabies. Put your guns away, lock your poisons up in a cupboard, and reach-out to us in return.