Tirana - Princess Lalla Meryem on Saturday attended the wedding of Prince Leka II of Albania and Elia Zaharia, celebrated in the former Royal Palace of the Albanian capital in the presence of many guests from various backgrounds. 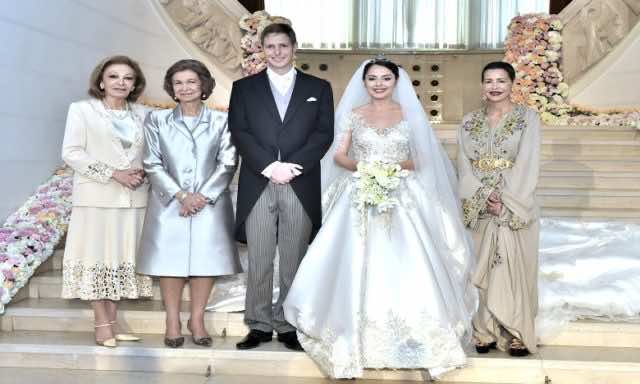 Tirana – Princess Lalla Meryem on Saturday attended the wedding of Prince Leka II of Albania and Elia Zaharia, celebrated in the former Royal Palace of the Albanian capital in the presence of many guests from various backgrounds.

The wedding ceremony was attended by dozens of ruling and not ruling families and several notables, including the President of the Republic of Albania, Bujar Nishani, Prime Minister Edi Rama and other officials.

Upon her arrival at the palace, Princess Lalla Meryem was welcomed and accompanied by the Master of the ceremony, Prince Charles Murat.

On this occasion, Her Royal Highness posed for souvenir pictures with the royal couple, after which the married couple proceeded to the traditional exchange of rings.

Following the ceremony, Princess Lalla Meryem took part Saturday in an official dinner hosted in honor of the guests.

Prince Leka II is the grand-son of King Zog I of Albania, who was forced into exile during the Second World War. He died in France in 1961.

The Albanian royal family returned to Tirana in June 2002 following a petition launched on the initiative of 76 MPs from different parties demanding his final return to Albania, in recognition of his contributions to the country and national unity.