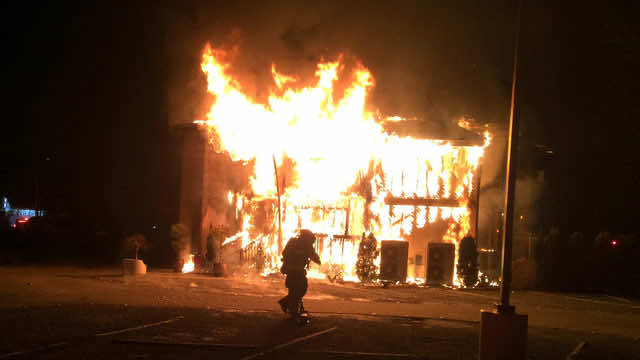 Rabat – A mosque located on the outskirts of Seattle was badly burned Saturday and a 37-yea-old man has been arrested. Members of the Islamic Centre of Eastside, otherwise known at the Bellevue Majid, are shocked and heartbroken over the burning of their mosque in the community of Bellevue, in the state of Washington.

While 50 percent of the building has been destroyed, authorities and mosque officials are grateful to report that no-one was injured n the fire.  Fire crews were able to send half of the building after fighting flames which, at times, reached 40 feet in height.

Police have arrested 37-year-old Isaac Wayne Wilson on a charge of felony malicious mischief after finding him laying on the ground behind the mosque, where most of the fire damage occurred.

While being detained, Wilson is being denied bail.  While the incident is not currently being investigated as a hate crime, police are searching for a motive.  Officials from the FBI, the Bureau of Alcohol, Tobacco, Firearms and Explosives have joined the investigation.

Deputy prosecutor, Mike Hogan, has been quoted saying “the suspect had prior contacts with the mosque” and that Wilson had previously been arrested for causing a disturbance at the mosque, though he did not elaborate on the nature of that incident.

The Council on American-Islamic Relations in Washington has issued a post on Facebook urging people not to jump to conclusions as to the suspect’s motive in this crime. “Please give authorities time to investigate.”

Meanwhile, the mosque has been closed for repairs and worshippers are now using a local community centre as a temporary home for prayers.  Donations are being asked for to help aid in the reconstruction.