Morocco World News
Home Culture Abdelah Taia: I Am Just Like All Moroccans

Rabat - From being the first openly gay Arab writer, to publishing eight internationally acclaimed novels, Abdelah Taia, has grown as an author and a film maker. He never forgot his country, his home, his Morocco, which has many things to offer and teach. 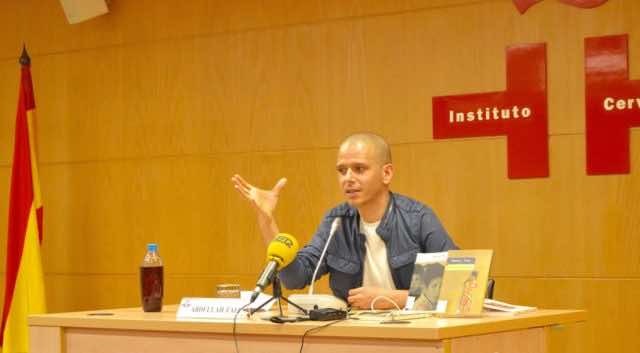 Rabat – From being the first openly gay Arab writer, to publishing eight internationally acclaimed novels, Abdelah Taia, has grown as an author and a film maker. He never forgot his country, his home, his Morocco, which has many things to offer and teach.

Invited as the speaker in an event organized by Rabat’s Cervantes Institute entitled “Cervantes and I,” Taia attended the event to speak about his experience with the institute.

Like all story tellers, he dug into his memory to spawn stories, so interesting they left the audience consumed with curiosity.

Instead of approaching the event’s theme directly, Taia chose to recall momentous events from his high school years, in a house, situated in the heart of Salé, where a married couple and their 12 children lived.

The author took his audience on a walk down memory lane where his younger self could be found seated in front of TV at 6pm sharp, in anticipation of cartoons broadcast on the only Moroccan TV channel at the time.

Taia’s first encounter with the Cervantes Institute was through Cervantes, the author, and Don Quixote, the cartoon series. The author recalled the influence of Cervantes’ character on his life.

Don Quixote was a dreamer and a bibliophile, much like Taia himself. But the two were brought together by bonds stronger than their love for literature and dreams, they were both unrealistic characters forged from the real world.

During his early years, Abdelah Taia was a closeted homosexual. He discovered through Don Quixote that those who dream too much would be struck by the bitterness of reality.

In a society where homosexuality was as fictional as 6pm cartons, “I learnt that if I was openly gay, no one would protect me, not my society, not my neighborhood, not my own mother,” explained the author.

My Spanish Lover and the Spanish Language

Having spoken too much of topics unrelated to the purpose of the event, Taia felt obliged to return to his experience with the institute. But even that story left the audience’s eyes wide open in anticipation.

After graduation from Mohammed V University’s French Department, “I had a lot of free time, while waiting to hear whether I was going to be admitted to a school I applied to or not.” “A Spanish man was in love with me. I told him of my family’s financial situation, and he said he would send me some money if I promised to use it for a good cause.”

The Spanish lover did indeed send Taia money. “He sent me an amount of MAD 2000, which was so much money to me. I didn’t know what to do with it.”

Keen on impressing his lover and setting himself aside from those who receive money from Europe for one reason or another and make no use f it, “I thought that the most honorable way to spend money given to me by a Spanish man was to use it to study Spanish.”

Taia did, for a short while, use some of money to enroll in Spanish lessons at the Cervantes Institute, but later on invested it in watching German filmmaker, Rainer Werner Fassbinder’s films screened by “Cervantes’ eternal competitor,” the Goethe Institute for German Studies.

“I was left with a tough choice, I had to chose between learning Spanish or watching Fassbinder. I chose the later and ended up being like most Moroccans who receive money and spend it on entertainment.”

Much like Cervantes, Fassbinder was also an influential character in the life of Taia. The filmmaker, who dealt with the theme of homosexuality in much of his films, gave Taia a sense of belonging to a community, whose issues could be seen on the screen.

My Teacher is My City

“Books are not the only thing that have made Abdelah Taia who he is today, my real teacher is the city where I grew up.” The novelist then went on to speak of how the knowledge and experience he obtained comes first from Salé, his hometown.

“I don’t understand why some authors search for poetry or a good story outside of their culture. Morocco has it all, it has taught me all.”

“I remember when I was a child and how my sister and I would walk around in the cemetery of Salé, weaving stories about the dead.” “I also remember watching Egyptian movies with my sisters. Their unprecedented approach to love and romance brought me closer, as a homosexual, to my sisters, who always knew of it, but never brought it up.”

Taia wrapped up the conference by asserting that his mother tongue, his city, religion, and country are what made him the author and storyteller he is now.