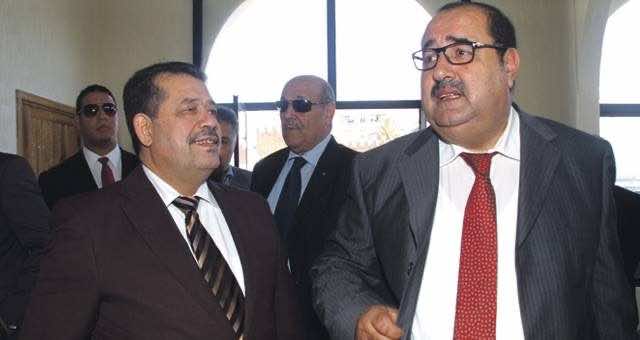 Rabat – For the last couple of months, internal division within The Istiqlal Party (PI) and the Socialist Union of Popular Forces (USFP), have been intensifying.

Leaders of both parties, Hamid Chabat and Driss Lachgar, are facing increasing opposition.

Chabat is losing his grip on both the party and the General Union of Moroccan Workers (UGTM), Istiqlal’s affiliated labor union.

On Friday a court decision ordered annulment the union’s extraordinary congress pro-Chabat members announced to be held on Sunday.

Police forces have intervened on Sunday to enforce the court’s decision as Chabat and supporters ignored the court’s judgment.

The move was deemed “illegal” by Chabat who maintained that Kafi Cherrat, the ousted Secretary General loyal to him, is the legitimate leader of UGTM.

Chabat’s time as Secretary General of Istiqlal might as well come to an end soon.

His rival for the party leadership, former Minister of Economy and Finance, Nizar Baraka, enjoys support of Ould Rachid and other former ministers.

Anti-Chabat Istiqlal members point out to his controversial term as the party leader, underlining his failure to maintain the party’s position as Morocco’ second political force.

During his mandate, Chabat led Istiqlal to withdraw from the government coalition in 2013, led by the Justice and Development Party (PJD).

In December 2016 he caused another tension between Morocco and Mauritania when he referred to the latter as historically part of Morocco.

Istiqlal is Morocco’s oldest political party. For decades it has been a major political force, rivaled only by its former ally, USFP.

His opponents accuse him of marginalizing key party members and taking unilateral decisions, thus exposing the party to secession.

During the last general elections in October 2016, USFP barely won 20 parliamentary seats, losing 18 seats in comparison with the 2011 elections.

Lachgar’s detractors blame him for the party’s poor results, stating he failed in his mission as a leader.

USFP was the major political opposition party during the reign of Hassan II, and one of the main left-wing forces in Africa and the Arab world.

In 1998 history was made when Hassan II appointed USFP leader, Abderrahman El Youssoufi, as prime minister.

Even though the party won the 2002 elections, the government coalition was led by Driss Jettou, a technocrat appointed by the King Mohammed VI.

The appointment of a technocrat as prime minister was considered a “democratic setback”.

Still, USFP accepted to take part in the government despite advocacy from El Youssoufi for the party to position itself in the opposition. Since then, it has been on the decline.