Rabat - UAE authorities will soon see themselves turning into the fashion police; in a tweet published by @newsemaratyah, anyone caught wearing the soccer team FCB jersey, which is sponsored by Qatar, will risk 15 years of jail.

By
Chaima Lahsini
-
Chaima Lahsini is freelance journalist and activist with the Al-Fam collective in Rabat.
Jun 12, 2017
Spread the love

Rabat – UAE authorities will soon see themselves turning into the fashion police; in a tweet published by @newsemaratyah, anyone caught wearing the soccer team FCB jersey, which is sponsored by Qatar, will risk 15 years of jail. 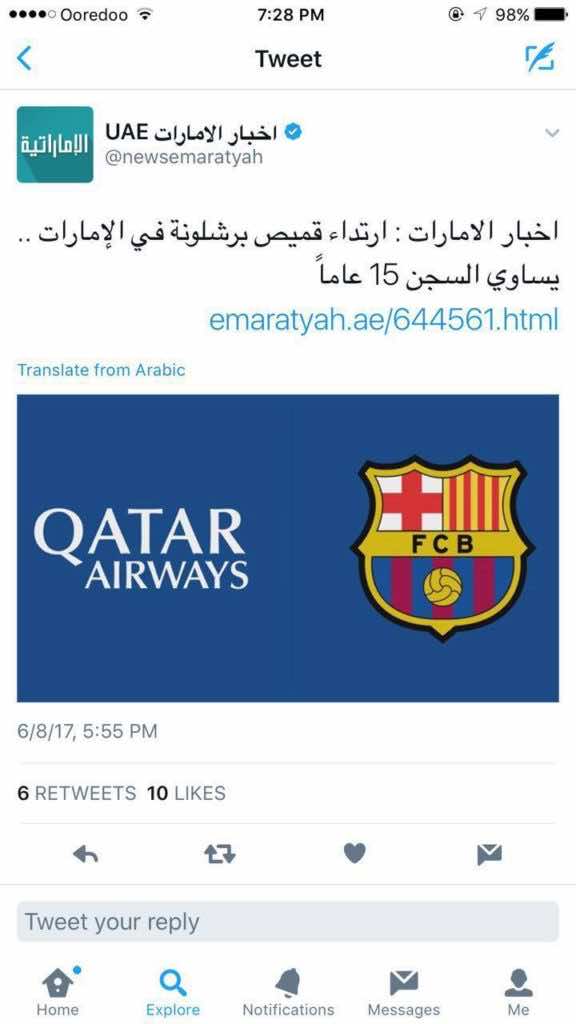 In an update on the ongoing feud between Qatar and five other Gulf countries, the UAE is taking drastic measures against any individual supporting Qatar.

UAE’s attorney general Hamad Saif Al Shamsi said in a statement on Wednesday that sympathizing with Qatar on social media is now considered a “cybercrime punishable by law.”

According to Emirati newspaper Gulf News, the UAE has banned people from showcasing expressions of sympathy towards Qatar, and will punish the offenders with a 15-year jail sentence.

“Strict and firm action will be taken against anyone who shows sympathy or any form of bias towards Qatar, or against anyone who objects to the position of the United Arab Emirates, whether it be through the means of social media, or any type of written, visual or verbal form,” Al Shamsi told Gulf News in a statement.

The Emirati Federal Public Prosecution also stated that those who “threaten the interests, national unity and stability of the UAE will face a jail term from three to 15 years, and a fine up to USD 136 000.”

Following the shocking rift between Qatar and its fellow Gulf countries, social media in the region has been swarming with tweets both criticizing and lauding the breaking ties with Qatar. Politically charged hashtags from both supporters and opponents have surfaced on social networks.

These measures against #Qatar is unprecedented, the inter-Arab/GCC relations hasn’t seen this escalation since Camp David Accords.

Even though being a fan of FC Barcelona will from now on be a crime punishable by law, the Spanish football club has affirmed that its sponsorship agreement with Qatar Airways has not been affected by the political tensions happening in the Middle East.

Qatar Airways have been sponsoring the Catalan team since 2013. With their sponsorship agreement with Barcelona coming to an end on June 30, Japanese company, Rakuten, will become the global sponsor of the team, starting July 1.