Rabat - Syrian refugee families previously trapped in borders between Morocco and Algeria have thanked King Mohammed VI for his decision to allow entry into Morocco. 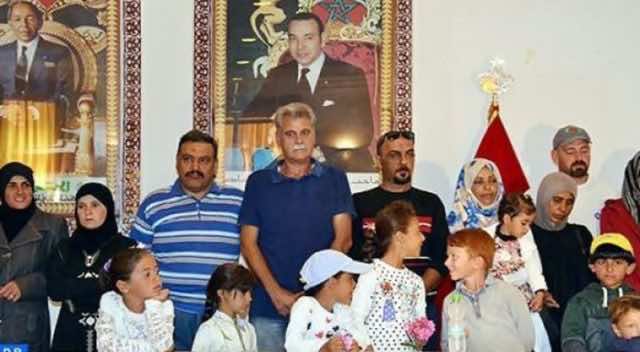 Rabat – Syrian refugee families previously trapped in borders between Morocco and Algeria have thanked King Mohammed VI for his decision to allow entry into Morocco.

The 28 refugees were transported to Rabat for the regularization of their status.

The decision by King Mohammed VI to end their ordeal came as a relief. The refugees had been trapped for two months near the border town Figuig, eastern Morocco, where they had been surviving in harsh and inhumane conditions.

Prior to their departure to Rabat, the refugees expressed their thanks to the monarch.

“Children were living in constant fears. During the day there were snakes and scorpions all around. At night it was cold and dust was blinding their eyes. Their situation was very bad,” said one of the refugees. “Thank God both they and we are now relieved.”

“All refugees here – men, women and children­ – thank Morocco and King Mohammed VI for his efforts”, said another refugee.

On Thursday the Royal Cabinet announced that the King had given orders to immediately solve the problem of the Syrian refugees.

The cabinet said the decision reflects the “humanist commitment of the Kingdom in the treatment of migratory issues and comes during these blessed days of the holy month of Ramadan, month of piety and solidarity.”

The Kingdom had previously accused Algeria of deliberately expulsing them into Morocco. Algeria denied the Moroccan accusations, saying they were aimed at “harming Algeria,” butdid not offer another version of events.

The Moroccan accusations had precedent. In January and March 2014, Algerian authorities expulsed dozens of Syrian refugees into Morocco, confiscating the passports of some in an attempt to clear traces of their passage from Algeria. The operation was conducted by the Algerian army.