Rabat - The largest renewable energy-run desalination plant designed for drinking water and irrigation will come to fruition in Agadir for a budget of MAD 2.6 billion.

By
Chaima Lahsini
-
Chaima Lahsini is freelance journalist and activist with the Al-Fam collective in Rabat.
Jul 1, 2017
Spread the love

Rabat – The largest renewable energy-run desalination plant designed for drinking water and irrigation will come to fruition in Agadir for a budget of MAD 2.6 billion.

Mohamed Boussaid, Minister of Economy and Finance, and Aziz Akhannouch, Minister of Agriculture, chaired the signing of the conventions for the creation of the world’s largest seawater desalination unit for irrigation and drinking water supply in the Souss-Massa region on Thursday in Rabat.

In partnership with the National Office of Electricity and Drinking Water (ONEE) and BMCE Bank, Spanish company Abengoa will help create this project. Abengoa is an international company that  applies innovative technology solutions for sustainability in the energy and environmental sectors.

The project is valued at MAD 4 billion in its two components (drinking water and farm water) and ultimately aims to secure the drinking water supply of the Grand Agadir region and provide water for high value-added irrigated agriculture in the Chtouka area.

Overall, the project involves the construction of a desalination plant with a 275,000 m3 total production capacity of desalinated water per day, which will make it the largest plant designed for drinking water and irrigation. The contract signed provides for the possible capacity expansion to up to 450,000 m3/day.

In addition to the initial MAD 2.6 billion investment for the drinking water component of the desalination plant , ONEE will dedicate additional investments of MAD 600 million to:  the installation of 44 km of pipes, the construction of a drinking water tank with a capacity of 35,000 m3, the installation of three high voltage power lines measuring over 55 km from the source station of Tiznit to the solar complex Noor Ouarzazate, and the construction of two pumping stations and two loading tanks.

For the drinking water component, the seawater desalination project is expected to secure the supply of drinking water for 2.3 million inhabitants by 2030, 20% of whom live in rural areas.

This large-scale project also presents the potential of being operated by wind power to meet the demand of water for domestic use, in addition to irrigation water needs in the Agadir area . At the same time, the project will contribute to the development of the region’s  main economic drivers, the agricultural and tourism sectors, and the conservation of local aquifers, therefore preventing their over-exploitation.

Speaking at the signing ceremony of these conventions  Boussaid stressed the importance of this project noting that it would allow the region to possess an agricultural water supply at extremely competitive prices at MAD 5 per m3.

For Akhannouch, the project “constitutes a lever for sustainable socio-economic growth for the entire region.”

Ali Fassi Fihri, Director General of ONEE, said the project aims to protect both underground sources and the coastline, as well as strengthening human development in the Souss-Massa region. “This project will allow Morocco to fit into this ‘vision of sustainable development’ and to satisfy the needs of the Souss-Massa region in drinking and agricultural water.”

The signing ceremony of the conventions related to this project was marked by the presence of Charafat Afilal, the delegated Minister for Water, and Ricardo Diez-Hochleitner Rodriguez, Spanish Ambassador to Morocco. 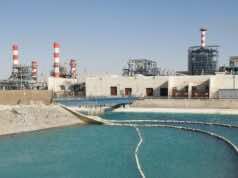