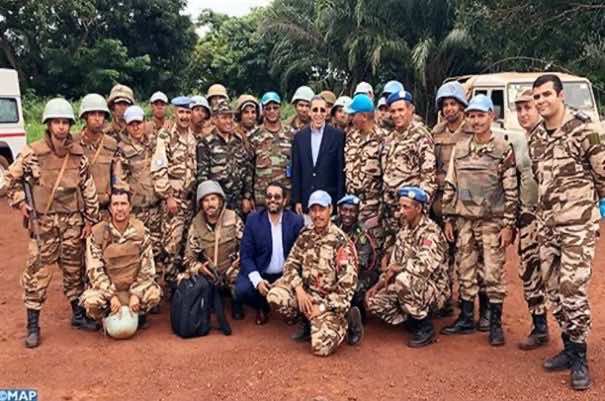 By
Chloe Koura
-
Chloé Koura is a final-year student of Arabic and Latin at the University of St Andrews.
Jul 17, 2017
Spread the love

Hilale expressed the UN Secretary General’s condolences and intention to arrest and bring to justice those responsible for the deaths of UN peacekeepers in CAR.

In May, four Cambodians and one Moroccan were killed, while a further nine Moroccans and one Cambodian were injured in an attack on a MINUSCA convoy.

The ambassador shared the support and admiration of the Moroccan people towards the Moroccan peacekeepers’ bravery, professionalism and peace-encouraging actions. He added that King Mohammed VI had put forward goodwill and solicitude to encourage the Moroccans to complete their mission in the CAR.

The ambassador conveyed a message of solidarity from all UN members and shared their appreciation to those who continued to persevere to restore peace, protect civilians and undertake actions benefiting the local society where they are stationed, despite difficult conditions.

Task force commander Mohammed Boungabad described the situation in CAR’s southeastern region since May to Hilale, saying it has been affected by violence from armed groups, who target both the local population and peacekeepers based there.

During his visit, Hilale met the mayor and bishop of Bangassou, the latter of whom thanked the King for sending school supplies to local Muslim and Christian children.

Since it was established in 2014, MINUSCA has deployed over 12,000 troops to the country to protect civilians, following concerns of the CAR’s “security, humanitarian, human rights, and political crisis.”

During his three-day trip, Hilale has led a civilian and military delegation, which included the UN Secretary-General’s Deputy Special Representative in CAR, Moroccan Najat Rochdi.