Rabat - Reporters and social users in Al Hoceima are having a hard time relaying the city’s July 20 march, as internet access have been unusually slow throughout the day. 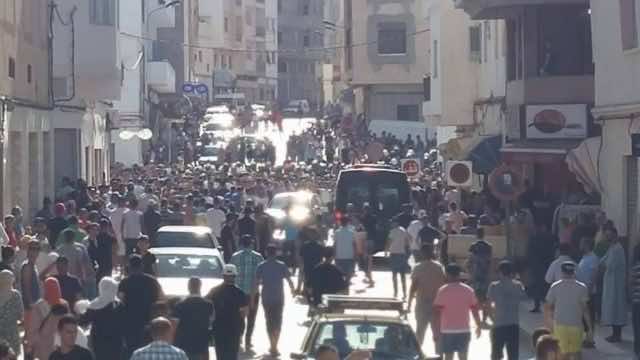 Rabat – Reporters and social users in Al Hoceima are having a hard time relaying the city’s July 20 march, as internet access have been unusually slow throughout the day.

Journalists have stated that they have been largely unable to share pictures and videos on social media.

At 5:22 pm, a group of around one hundred headed to demonstrate at Place des Matyres, Al Hoceima’s main square, according to local media reports.

Protestors were however shortly pushed away from the square by security forces, without use of violence. A few minutes later, small groups began gathering again near the main square, armed this time with megaphones. They were again dispersed by police intervention.

At about 5:30, protesters turned away from the main square due to the heavy police presence and headed out to the city, with some car driver honking their horns in support.

At 5:38, protesters, including teenagers, children, and women headed back to the main square, shouting slogans including “death or freedom.” Minutes later, Al Hoceima city authorities reported that the police had begun using tear gas grenades.

“Strong intervention of the public forces at several points in the city with heavy firing of tear gas,” read a post on one of Al Hoceima city’s Facebook pages.

At 5:50, some protesters were reported to be throwing stone at the police. With relentless police intervention, the demonstration was unable to remain on the main square. Shortly afterward, small groups of demonstrators moved through the neighboring streets, chased by security forces.

The manifestation does not have a predictable development. Small groups, estimated between 2,000 and 3,000 individuals, move at every charge of the police.

At 6, Place des Martyres is impossible to access. The police appear active and very well organized. Barring an unexpected turn of events, the expected mass march will not take place.

Police managed to stop the demonstrators in the city’s alleys, outside the city or on the heights. The protesters are overwhelmingly young.