Rabat - A Moroccan man was arrested after using a knife to attack and injure police on the Melilla border at 7.35 a.m. Tuesday morning. 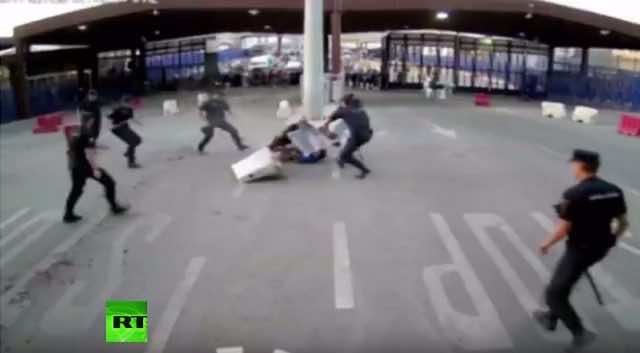 Rabat – A Moroccan man was arrested after using a knife to attack and injure police on the Melilla border at 7.35 a.m. Tuesday morning.

Spanish Minister of Interior Juan Ignacio Zoido tweeted: “The police have detained a man who attacked agents with a knife on the border crossing of Beni Enzar, one of them slightly wounded.”

The minister also shared surveillance footage of the moment police took down the man, who has mental health issues, on his Twitter page. In the video, the man, wearing a blue top and white shorts, can be seen waving a knife. A police officer hits him with a white traffic bollard, knocking him to the ground. Other police officers then join to help restrain the man.

The unnamed man was carrying a large knife, whose size led a witness to describe it as a “jamonero” knife, used for cutting ham.

One police officer required medical attention for a hand injury suffered while subduing the attacker, whose age has been described as 20s or 30s.

Local media reported that the man shouted “God is greatest,” and “Al Hoceima, Freedom” as he ran towards police. National Police are investigating the attacker’s motive, and the Ministry of Interior has not ruled out it being of a terrorist nature.

Police sources revealed the attacker staged a similar incident recently, but did not carry a knife.