Rabat - Venezuelan president Nicolas Madoro arrived in the Algerian capital on Sunday for a two-day visit. 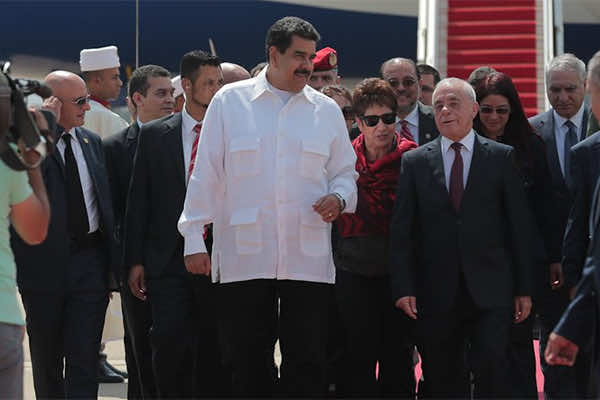 Rabat – Venezuelan president Nicolas Madoro arrived in the Algerian capital on Sunday for a two-day visit.

The Algerian presidency said in a statement that Madoro’s trip to Algiers is an opportunity “to evaluate bilateral relations of friendship and cooperation between the two countries.”

Madoro was greeted at the city’s Houari Boumediene airport by Abdelkader Bensaleh, the president of the Council of the Nation, the upper house of the country’s parliament.

As the Algerian online media outlet TSA pointed out, the agenda of Madoro’s trip is not known. The news website described the visit as seemingly having been scheduled at the last minute.

The embattled Venezuelan leader landed in Algiers following his participation in the Organization of Islamic Cooperation (OIC) in Astana, Kazakhistan, where he took part as the serving president of the Non-Aligned Movement.

AFP said that Algerian officials did not exclude the possibility of a meeting between Madoro and President Abdelaziz Bouteflika.

However, the health of the Algerian president continues to deteriorate. The last time he received a foreign official was in March, when he he met with Congolese President Denis Sassou-Nguesso.

Caracas and Algiers entertain good relations. Both countries are members of the Organization of the Petroleum Exporting Countries (OPEC), and both share a similar stance on the question of Western Sahara.

Along with Cuba, Venezuela is the Polisario Front’s biggest supporter in Latin America, which has often led to verbal clashes between Omar Hilale, Morocco’s permanent representative to the United Nations, and the Venezuelan ambassador Rafael Ramírez.

Madoro’s visit to Algeria takes place at a time where the South American country is still divided between the president’s supporters and his opponents.

The Venezuelan government met anti-Madoro protests with oppression, accusing them of serving a foreign agenda to topple the regime.

On Monday, the United Nations human rights chief Zeid Ra‘ad al Hussein stated that crimes against humanity had been committed in the country.