Rabat - Only one day after the Russian prime minister and minister of agriculture arrived in Morocco, the two states have established 11 alliances in energy, military affairs and agriculture. 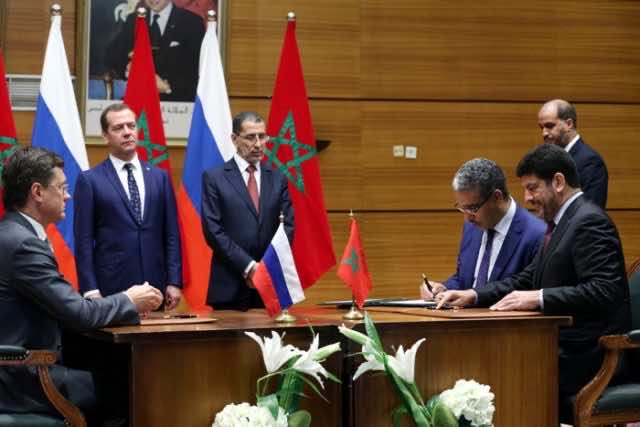 Rabat – Only one day after the Russian prime minister and minister of agriculture arrived in Morocco, the two states have established 11 alliances in energy, military affairs and agriculture.

During Russian Minister of Agriculture Alexander Tkachev’s meeting with the Moroccan Minister of Foreign Affairs and International Cooperation, Nasser Bourita, Tkachev welcomed the Moroccan-Russian partnership in the field of agriculture and energy.

Tkachev expressed his country’s willingness to further increase exports to the kingdom, including wheat, vegetable oil, and sugar.

“Moroccan exports, particularly in terms of citrus fruits and vegetables, have been present in Russia for a long time. Russia aims to develop their agro-food supply to the country.”

The minister also highlighted Russia’s willingness to extend Morocco’s exports to Russia in terms of agricultural vehicles and equipment.

The discussions also focused on ways to boost Russian-Moroccan cooperation in the field of energy.

“Russian companies are ready to contribute to the construction of thermal power plants in Morocco and are also willing to deliver liquefied natural gas,” he said.

This commitment was repeated by Minister Dmitry Medvedev, who said that Russia will help build the gas terminal at Jorf Lasfar, 130 kilometers south of El Jadida, with a budget of USD 2 billion.

Morocco and Russia have also signed an “important agreement” on military cooperation and security, said El Othmani at the opening of the High Joint Cooperation Committee in the presence of Medvedev.

The Russian prime minister said during a press briefing that the agreement consists of “deliveries of Russian military products to Morocco.”

Morocco and Russia have also signed an agreement on nuclear cooperation, at the meeting of the Moroccan-Russian High Commission, in the presence of officials of the Moroccan Nuclear and Radiological Safety and Security Agency.

After signing a total of 11 agreements on Wednesday, both officials highlighted the excellence of the “strategic partnership” between the two countries.

“Morocco is a strategic partner in Africa and the Arab world,” said Dmitry Medvedev.

El Othmani, for his part, underlined that Morocco is the “top trading partner of Russia in Africa,” with nearly EUR 3 billion of trade in 2016, adding that in the same year, Morocco ranked the ninth supplier and 22nd client of Russia.

Last July, Moscow hosted the 6th session of the Moroccan-Russian Joint Commission for Economic, Scientific and Technical Cooperation.This session provided an opportunity for businessmen from both countries to explore ways of further developing economic relations, promoting mutual investment and diversifying areas of cooperation.