Rabat - Morocco’s Head of Government, Saad Eddine El Othmani, denied all allegations regarding the safety of drinking water that is produced from Sidi Mohammed Ben Abdellah Dam in Rabat. 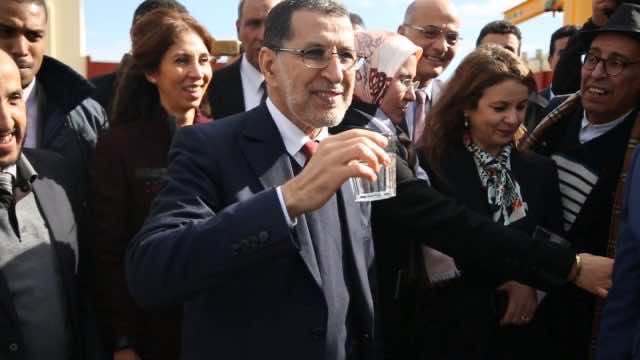 Rabat – Morocco’s Head of Government, Saad Eddine El Othmani, denied all allegations regarding the safety of drinking water that is produced from Sidi Mohammed Ben Abdellah Dam in Rabat.

During a Wednesday, February 7 meeting at the Bouregreg water purification facility organized by the National Office of Electricity and Drinking Water concerning the quality of drinking water in the region, Othmani assured Moroccans that the water produced at the Bouregreg station is safe to drink.

“You are in good hands when it comes to drinking water,” he said. The Bouregreg water facility supplies the populations of Rabat, Sale, Temara, Mohammadia and Casablanca.

In an attempt to reassure citizens, El Othmani said that one of the quality control regulations at the facility states: “All workers are strictly prohibited from bringing in bottled water, since they drink the water that was treated at the station and that they have watched over its filtration themselves.”

This was perceived by the prime minister as evidence of the high level of integrity of both the workers and the facility’s management in managing the region’s water supply.

“I can only salute the people responsible at this station because they are invisible soldiers, unknown to the public, that conduct important patriotic work and take all the precautions to insure the security, safety, and health of the citizens,” El Othmani said.

After acknowledging their efforts, the Head of Government asked those in charge of the plant to continue to provide safe, clean and affordable drinking water to the region.

Furthermore, Othmani used the meeting as an opportunity to dispel all public doubts, and to emphasize the numerous testing and monitoring phases that the water goes through in order to become potable.

In the same context, the Head of Government assured citizens that the laboratory conducts analyses that follow the standards set by the World Health Organization (WHO) in coordination with the Ministry of Health.

First opened in 1969, the Bouregreg water facility is considered the first and largest water purification station in Morocco, since it provides drinking water to nearly seven million citizens.