Rabat - After posting a photo on his Facebook with King Mohammed VI, Israel Goldberg has returned in a live video to narrate his discussion with the Monarch. 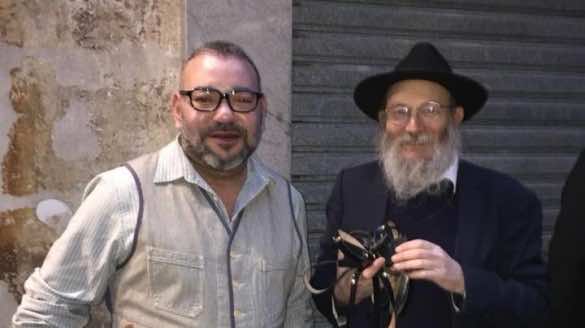 Rabat – After posting a photo on his Facebook with King Mohammed VI, Israel Goldberg has returned in a live video to narrate his discussion with the Monarch.

Then he proceeds to debrief viewers about their discussion.

“I had the honor this afternoon to transmit the seven universal principles–the seven laws of Noah–to the King of Morocco who had symbolically come to buy a pair of glasses at Jonathan, at 17 rue des Rosiers, the building where is located the Lubavitch synagogue which is at the same time the oldest of Paris.”

The seven laws of Noah: do not worship idols, do not curse God, establish courts of justice, do not commit murder, do not commit adultery or sexual immorality, do not steal, and do not eat flesh torn from a living animal.

Goldberg also mentioned the Rabbi Lubavitch’s message advising that every school, every single house, including the royal palace, ought to have a sadaka (charity) box.

Then he replied gently, “you also know the sadaka.” Adding that “every human being must take a minute of silence to reflect, each with his own ideas, to become a better being.”