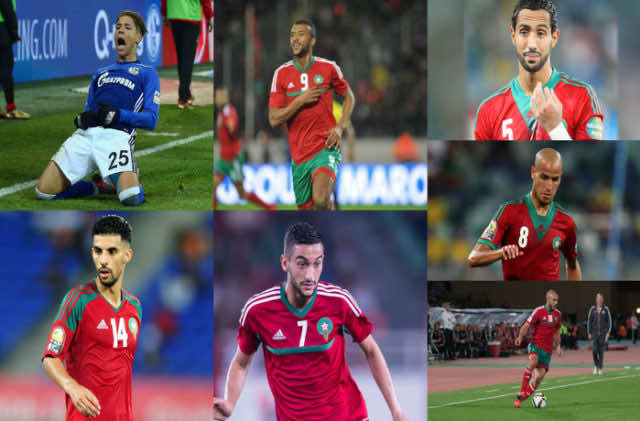 After 20 years, Morocco is back on the field and on the road to Russia 2018 with a football squad full of potential.

Only six of the 23 players selected for the national team were born in Morocco, while the others were born in either France, Spain, or the Netherlands. Because all players have Moroccan heritage and have maintained a connection with Morocco, FIFA rules allow them to represent the country in the World Cup. Morocco’s talented bench would not be the same without its diasporan players.

For the first match on June 15, Morocco will face Iran. This is a must-win game for the Atlas Lions as they will next be up against two tough teams, Spain and Portugal. Who are the key players on the team that could deliver Morocco to the World Cup’s next round?

The national team captain and Juventus F.C. center back Mehdi Benatia’s goal is to lead his team into the knockout stages against the odds. Since Spain and Portugal hold a strong soccer reputation, many are already doubting Morocco’s chances.

Attacking midfielder Mbark Boussoufa is a two-time Belgian Golden Shoe winner and former player on the Chelsea youth team back in 2006. The 33-year-old is filled with experience and ready to bring his skills and techniques to the national team.

Born in the Netherlands to two Moroccan parents, Karim El Ahmadi is a former Aston Villa midfielder, and also one of the most experienced players on the squad.

Former Watford midfielder, Nordin Amrabat is a current player for Spanish club CD Leganés and for Morocco’s national team. Amrabat has represented Morocco at two Africa Cup of Nations and the 2012 Olympics.

The 24-year-old striker, Ayoub El Kaabi, can possibly shift the spotlight towards himself with his outstanding statistics. With 9 goals, he was the top goalscorer of the CHAN 2018 (Total African Nations Championship), hosted by Morocco.

Romain Saïss currently plays as a midfielder for English club Wolverhampton Wanderers and the Morocco national team. The 28-year-old Frenchman was qualified to play for the Atlas Lions through his Moroccan ancestry. According to The Sportsman, Saïss completed almost 2,000 short passes throughout the season, putting him 5th in the Wolverhampton Wanderers league overall.

Currently playing as a midfielder for German club Schalke 04, the 20-year-old French-born Amine Harit is Morocco’s future star player. The young footballer has caught many clubs’ attention with his mastery of speed, agility, and ball control.

Spanish-born Moroccan Achraf Hakimi plays for Real Madrid. As a 19-year-old defender, Achraf is an attacking threat and has managed to make his way to the top of the field to score three goals for Real Madrid, while also making valuable assists.

Twenty-five-year-old Hakim Ziyech plays as an attacking midfielder for Ajax Amsterdam. He is known for his ability to put the ball behind the net in his free kicks.

According to The Sportsman, Ziyech has eight goals from 15 caps, giving him the second highest goal-tally on the team, and he will be key to creating or scoring the goals that Morocco will need to progress in Group B.