Rabat- Not long after Benatia’s photo sheltering a little girl from rain warmed hearts, a new inspiring photo-video of a Moroccan teacher who has changed the lives of his rural students has emerged. 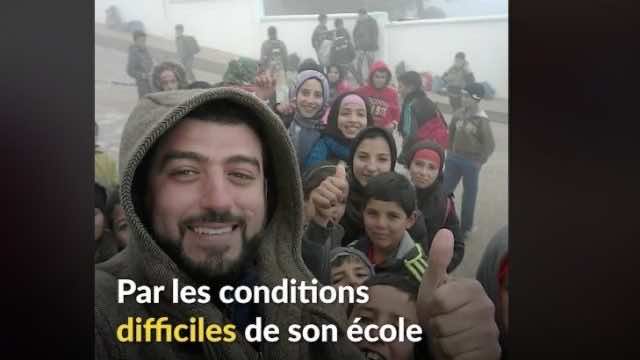 By
Ahlam Ben Saga
-
Ahlam Ben Saga is a Cultural Studies graduate from university Mohammed V of Literature and Humanities in Rabat.
Jun 7, 2018
Spread the love

Rabat- Not long after Benatia’s photo sheltering a little girl from rain warmed hearts, a new inspiring photo-video of a Moroccan teacher who has changed the lives of his rural students has emerged.

After the young teacher moved to teach in a rural douar (village), the school’s poor condition did not discourage him from doing the job he loves. The young man took the initiative to create a fun and comfortable environment for his students who had never left their douar before.

The video which recently circulated online and garnered more than two million views on Facebook, features photos capturing the bonding moments between teacher and students and how he transformed their lives with small but impactful gestures.

He painted the classroom with vivid colours to make school more exciting, organized excursions around the region, taught the students how to brush their teeth, bought them clothes, and hosted occasional classroom parties and educational activities that were unfamiliar to the students before.

The teacher’s gentle heart has won over many social media users who deemed him an “exemplary” teacher who loves his job. They were also reminded of the Atlas Lions captain Mehdi Benatia’s recent photo capturing the moment he sheltered a little girl’s head from the rain with his pennant, before the pre-World Cup friendly between Morocco and Slovakia.

Benatia’s photo has not only warmed the hearts of people, but also inspired the photoshop skills of Moroccan trolls who made a meme of the photo with the former Minister of General Affairs and Governance, Lahcen Daoudi, who resigned amid criticism after he joined Tuesday’s sit-in against the Centrale Danone boycott.