Rabat - Moroccan football star Nordin Amrabat is expected to join his fellow teammates in the training field within a week, according to his doctor, who said that Amrabat's health condition is “stable.” 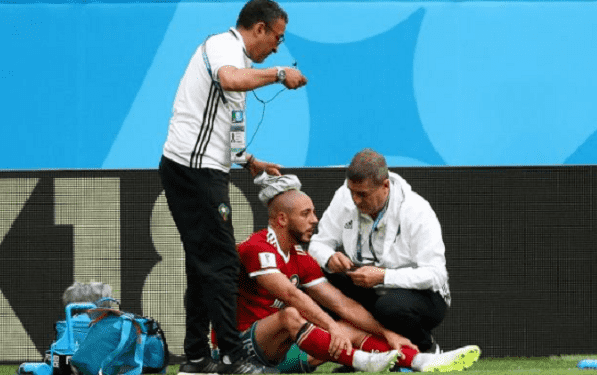 Rabat – Moroccan football star Nordin Amrabat is expected to join his fellow teammates in the training field within a week, according to his doctor, who said that Amrabat’s health condition is “stable.”

Amrabat suffered a head injury in the 76th minute of the Moroccan national team’s first game of the 2018 World Cup. He lost consciousness for several minutes following the blow to his head. The team’s medical staff rushed Amrabat off the field, slapping him repeatedly and spraying his face with water once he was safely on the sidelines.

The footballer then was transferred to a hospital in St. Petersburg for a medical examination. Scanner tests revealed that his condition was not critical. The footballer left the hospital this Saturday.

“The health of the player is stable and does not cause concern. He will leave the hospital on Saturday,” national football team doctor Abderazzak Hifti.

Amrabat, however, will take a week-long break from training and will sit out the Morocco-Portugal game on June 20.

Morocco lost against Iran at its first 2018 World Cup game after Moroccan footballer Aziz Bouhaddouz mistakenly scored an own-goal in the extra time of the second half.

Morocco will play its second match against Portugal on June 20, while its third game will be played against Spain on June 25.