Rabat - Forget about Syria’s Michel Aflaq’s Arab socialist revivalism or Egypt’s Gamal Abdel Nasser’s Arab nationalism  or even the increasingly self-congratulatory pan-Africanism, say Moroccan sports and political commentators as they chafe at the heavy defeat of Morocco’s bid to host the 2026 FIFA World Cup on June 13. 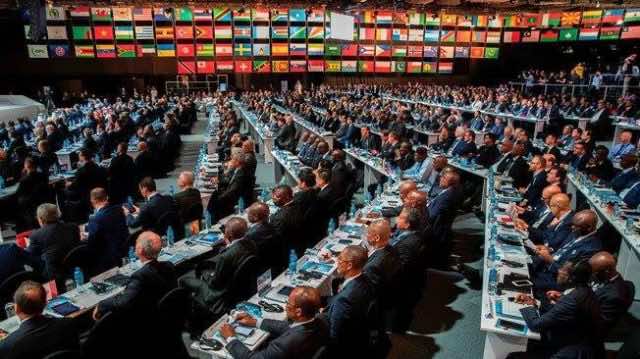 Rabat – Forget about Syria’s Michel Aflaq’s Arab socialist revivalism or Egypt’s Gamal Abdel Nasser’s Arab nationalism  or even the increasingly self-congratulatory pan-Africanism, say Moroccan sports and political commentators as they chafe at the heavy defeat of Morocco’s bid to host the 2026 FIFA World Cup on June 13.

When the 68th FIFA Congress convened last Wednesday in Moscow, it was clear that a prospective Moroccan triumph would be a dramatic ending to a competition in which the organizers, FIFA, had consistently and brazenly manifested their sympathy for the North American bid.

In an era when big businesses and supranational corporations have invaded the sporting world, making games bereft of the passion that once characterized them, to beat geopolitical giants with great media power is not only revolutionary. it is impossible, as Morocco 2026 discovered in Moscow.

But if Morocco’s failure to beat the North American trio did not surprise many, those in the marginalized parts of the world were shocked that Morocco’s appeal to “love, passion for football, and the opportunity to impact the lives of millions” of downtrodden people did not convince even one-third of the FIFA family. FIFA even brags about inclusiveness and fair-play.

In the June 13 vote, Morocco expected strong African and Muslim support, even in the inevitability of losing to what Trump had called a “strong bid.”

For Morocco 2026 officials, the stakes were much more than money and mere geopolitics. It was about shared values, cultural and geographical proximity, and the sustenance of a passion-driven sport. It was, they had expected, a united league of the weak and marginalized against the strong and eternally privileged.

However, 11 African countries defected, preferring North America’s United bid over a bid that had campaigned on representing pan-Africanism. That was relatively understandable to Moroccan media, as the Western Sahara issue has now become the middle finger that many states, mostly African ones with regional ambitions, quickly raise as soon as their interests diverge with Morocco’s.

But if criticism towards specific African countries was mild, one thing that Moroccan fans found unfathomable, and even unforgivable, was the “betrayal of the Arab world,” which many commentators said came about as a result of Saudi Arabia’s “treacherous and shameless lobbying against Morocco’s bid.”

“When the Arab World divorces over the organization of the World Cup,” Moroccan daily Telquel headlined a June 14 article about the last-minute theatrics of a disastrous defeat in a contest in which both bids were expected to have an equal chance of winning.

The daily went on to cite a Moroccan social media user who took to Twitter to announce her Eureka moment: at least, she said, she now knows that “Arabs do not consider us [North Africans] to be Arabs.” She continued: “My heart goes out to those who have just discovered that the Arab World does not like North Africa, and that Arabs do not get involved with North Africans.”

“Morocco 2026 was a lie as huge as the Arab world,”  Moroccan outlet Le 360 lightheartedly wrote, excoriating those who speak profusely about unity and brotherhood and yet turn their backs when called to support claims they themselves had made in the eyes of the world.

“Can we still speak of the Arab World?” the daily defiantly asked, after pointing out that 7 Arab countries, including Saudi Arabia, voted for the North Americans.

Speaking of Saudi Arabia, other outlets went further than denouncing the “hypocrisy and the lack of solidarity” that characterized the votes of many who “should have voted for a fellow brother.” In its June 18 issue, Casablanca-based daily Akhbar Al Yaoum suggested that Morocco stop treating countries such as Saudi Arabia as strategic allies.

“It is time that Morocco retreats from the Saudi coalition in Yemen,” the daily wrote. To the Casablanca-based newspaper, the magnitude of the defeat, and the actors who made the margins so considerable (134 votes against 65), made the loss “feel like backstabbing.”

As if the outpouring of protests were not enough, some commentators suggested that third-world ideals such as pan-Arabism and pan-Africanism are pure tokenism, “historical lies” that never truly existed.

“I’m surprised to see that many Moroccans still associate themselves with Arab or Muslim solidarity. History has taught us that such ideals are vague chimeras in which no one actually believes. It is a pity that we are still speaking about this,” political scientist Abdelmajid Belaghzal said.

Of course some countries joined Morocco in grieving values it once sanctified. There was public outrage in some countries that did not vote for their “brother.”

Some officials reacted: Guinea and Lebanon denied voting for the United bid. “It is impossible. Guinea cannot vote for the Americans. There was a mistake there. We have one unalterable principle in our international dealings, and that is to support an African brother before anyone else,” the Guinean Football Federation said in a statement.

But such drama of public outcry and last-minute complaints about wounded pride will not change anything about the fact that Morocco lost and that some friends failed to support its bid, suggested a statement that the Royal Moroccan Football Federation issued after the June 13 fiasco, probably in an effort to tell Guinea and Lebanon to keep their brotherhood of convenience theatrics to themselves.

The conclusion? Simple: only in tales and the Scriptures can you expect a little David to dare to challenge and win against three Goliaths. But in the geopolitics of chaos and blackmailing that the world is turning into, power delivers, and brazenly-postured naked power delivers even more effectively.