Rabat - In less than an hour, football fans will watch Morocco face off with Portugal. Morocco’s head coach Hervé Renard and Moroccan footballer Nabil Dirar have said it: the battle will not be easy. 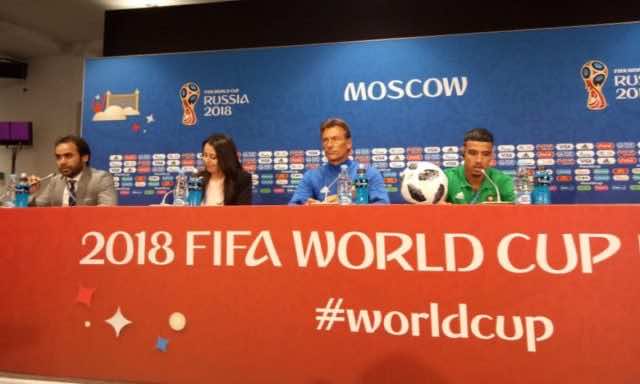 Rabat – In less than an hour, football fans will watch Morocco face off with Portugal. Morocco’s head coach Hervé Renard and Moroccan footballer Nabil Dirar have said it: the battle will not be easy.

At a press conference yesterday in Moscow, Renard wore a mysterious expression and refused to talk about his lineup in today’s game against Portugal when asked if there would be a surprise in his 11.

“Surprises. Do you mean changes in the lineup? You will see tomorrow. We are not here to unveil the players to be playing tomorrow. We are here to talk about the game in general,” Renard said.

One reporter asked if Nordin Amrabat, who sustained an injury in Friday’s game, will play against Portugal today. With sparkling eyes, Renard said “All players participating in World Cup want to play, but we have to make a decision after our last training session.” When another journalist asked if Renard wants Amrabat to play, it did not take him long to say yes.

“Yes, but we will make a decision; don’t worry,” he said.

“We will see if the trauma disappeared or not tomorrow. I am kidding,” Renard said after one journalist asked him if Morocco’s team is over its defeat against Iran with an own goal in overtime.

Team should look ahead

Speaking about his selection, Renard said that the footballers “have lost a number of matches, such as this one. You got to get it and get back to your feet. Nobody should be complaining after the game. It happened to Tunisia as well after a good game. This is football.”

Tunisia lost to England 2-1 at the last minute of the game after a good defensive performance.

The secret for Renard is self-confidence. “You have to believe in yourself with your qualities and weaknesses.”

Attending the conference with Renard, attacking midfielder Dirar commended Moroccan fans, and said “The only solution for us is to win this battle. We don’t want a draw. We want to win. We have a good team and players and we will do a good job.”

Journalists also asked if the coach and his players have an anti-Ronaldo plan.

For Renard, the Moroccan team is “lucky to compete against the European champions. It is exceptional.”

Dirar not concerned about Ronaldo

But for Dirar, Cristiano Ronaldo “should be respected” after his game against Spain, but “he is a player just like any other player.”

“We cannot afford to make any mistake. Obviously, this is Cristiano. And if he has an opportunity, he will score a goal. He is a major player, but they have other players, like Silva, and other good players. We don’t have to leave any space for Ronaldo,” Dirar added.

Renard said it is impossible to make a plan work against Ronaldo.

“Even if you want to draw a plan against him, he always finds a way out. He will always make a different plan. He is absolutely exceptional and outstanding. But we need to make him less exceptional tomorrow.”