Rabat- The terrorist behind a van bombing in Basilan Island is strongly believed to be Moroccan ISIS member Abu Kathir al-Maghribi. 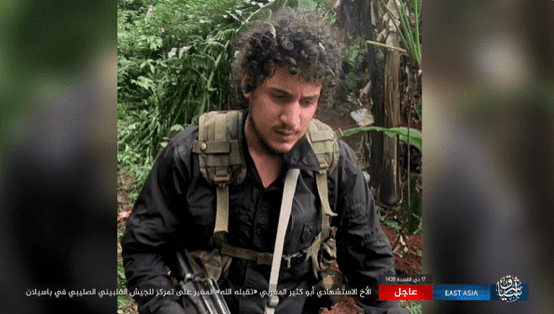 By
Ahlam Ben Saga
-
Ahlam Ben Saga is a Cultural Studies graduate from university Mohammed V of Literature and Humanities in Rabat.
Aug 13, 2018
Spread the love

Rabat- The terrorist behind a van bombing in Basilan Island is strongly believed to be Moroccan ISIS member Abu Kathir al-Maghribi.

ISIS has claimed responsibility for a van explosion that killed 11 people, including a 10-year-old child, in the southern Filipino island of Basilan on July 31.

On the same day of the terrorist attack, a Twitter user with the handle @TerrorMonitor shared a photo of al-Maghribi corresponding to the description of eyewitnesses.

Military intelligence services in the Philippines suggested that the jihadist’s main target was a gathering of school children nearby, according to Filipino news site Philippines Lifestyle.

Al-Maghribi was allegedly avenging the death of his son, killed in a clash between ISIS and the Filipino army.

Philippines’ Interior Undersecretary Eduardo Ano told the Associated Press the van driver “was targeting an event that gathered about 3,000 people but something went wrong with his van,” before it suddenly exploded.

Philippines Defense Secretary Delfin Lorenzana speculated on the suspect, saying, “Maybe he is that guy. There are still doubts as to whether he is behind the attack. But for me, qualifications point to him,” reported AP.

‘Terrorism has no nationality’?

According to a recent study by a Madrid-based think tank, Elcano Royal Institute, nearly half of the ISIS jihadists arrested or killed in Spain in the past five years were of Moroccan origin.

Furthermore, 6 out of 10 of the suspected terrorists were second-generation descendants of Moroccan immigrants.

The figures raises the question: “Is it easier for Moroccan nationals to join terrorist groups in foreign countries?”

The head of Morocco’s Central Bureau of Judicial Investigations (BCIJ), Abdelhak Khiame, believes that individuals’ birthplace does not determine whether they will adopt a radical position.

“It is rather the environment in which they were raised. Yes, these people have Moroccan roots but they were born, grew and acquired values from Western countries,” Khiame told British news agency BBC two years ago.

Other writers and world leaders agree, including Russian President Vladimir Putin, who said, “Terrorism has no nationality or religion.”

Renowned Moroccan author Tahar Benjelloun wrote in 2017: “Those killers belong to no country…. [they] belong to [ISIS] and have no country. They claim belonging to a promised land in a mythical and improbable hereafter.”